In the beginning of Daredevil (Volume 3) #16, Matt Murdock is out of action. With that in mind, here’s a loose history of the red-headed adventurer. 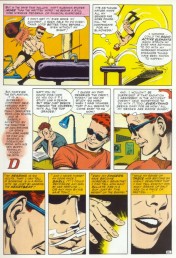 The first issue, by co-creators Stan Lee and Bill Everett, is a good superhero crime drama. Matt Murdock, adopting the moniker Daredevil, seeks his father’s murderer. Also in the origin there’s Murdock’s relationship with his father, Battling Jack Murdock and how Matt got his powers and law degree. 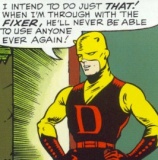 His early adventures had him looking like a Mustard Devil more than a Daredevil. Artist Wally Wood gave the world the trademark DD costume. Gene Colan gave the DD series spectacle. Many other artists and writers came and went.

Some early DD stories exaggerated DD’s power, such as the ability to fly a plane! That just isn’t plausible no matter how great Matt’s radar sense is. But that’s typical Silver Age wackiness. 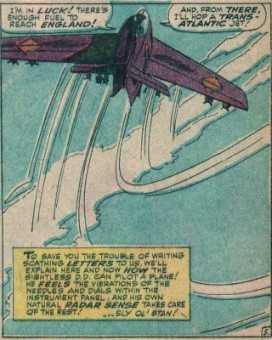 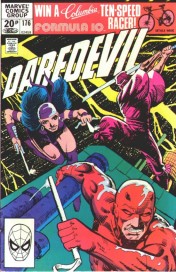 Much later, Frank Miller tweaked DD to the point where “grim and gritty” became standard storytelling. This cover shows typical elements of Miller’s Daredevil such as lover/rival Elektra and a ninja. Also in this era is the revelation that DD’s Catholic.

Anything that helped indirectly bring us the Teenage Mutant Ninja Turtles can’t be bad.

Miller’s DD made enough of a splash in the comics world that even Alan Moore wrote a parody:

Maybe I should get a collection of Miller’s run…

After almost 40 years of stories, DD made his big motion picture debut. Some casting choices may have been odd like having Ben Affleck as the star, but at least there were cool moments in the movie.

Skipping ahead in the comics, I have volume one of the current DD series by Mark Waid & Rivera. There are good superhero stories inside. The creative team does a fine job not dragging the stories into angst or darkness overload.

Anyway there are almost 50 years of DD adventures. With a new movie hopefully coming soon, interest in the red rooftop runner will increase and people will discover how awesome DD can be.