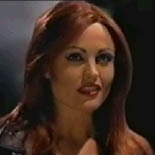 Above: the many faces of today’s Redhead of the Day, Mara Jade Skywalker. (See the Mule of the Day)

“Where have you been all my life?” Jedi Knight Luke Skywalker probably asked our favorite assassin-turned-smuggler and future soulmate to Son of Darth Whiney.

That’s a question I, a movies-only Star Wars fan, wanted to ask, too.

Mara Jade Skywalker was created by Star Wars scribe Timothy Zahn. Zahn created a lovely redhead with a dancer’s figure who could stand beside Palpatine who was NOT planned as Luke’s love interest. Luke, that goody-two-shoes New Jedi, needed a more worldly foil. Thankfully, with George Lucas altering Leia’s origins, Zahn and others stepped up to give us another strong female character and the inspiration for many cosplayers.

As far as I know, she’s one of the few notable (human) redheads in the Star Wars saga. She has the components of favored action babes: a dark history involving the Emperor, briefly being Billy Dee Williams’* girlfriend, having awesome fighting Force-assisted skills, and manipulating the character to fulfill our battle fantasies, as seen in the video game Masters of Teräs Käsi:

I’m not going to print a bunch of words about her biography or how hot/awesome/nerfherder she is. Not surprisingly, she’s a big deal in the Expanded Universe. Too bad someone had the idea of having Han Solo’s kid kill her off! I love the idea of the character, but should I really set a lot of bookshelf space to her adventures, action figures, and lightsabers?

Darth Mule of the Day: A Star Wars fan video where a decision is quickly reached starting at 0:59.

If you like this article, share it! Also, comment on this article to tell us your thoughts on Mara Jade! The tools you need to do so are found below: