In honor of the release of TMNT Microseries #7 and the upcoming Nickelodeon cartoon, April O’Neil is today’s Redhead of the Day.

Anyways, in the current TMNT comic by IDW, April is a college student studying science and interning at Stockgen. In TMNT #13, she tries to bond with Casey Jones after Casey suffers abuse from his father. She’s also responsible for naming the turtles after the classical masters of art: 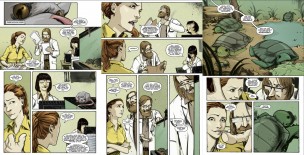 Her most recent appearance as of August 2012 is in the comic microseries #7, written by Barbara Randall Kesel with art by Marley Zarcone. Here, April retrieves a turtle tracker for Donatello inside Stockgen. Here is April in a peaceful moment with her friends:

I’ve enjoyed what I’ve read of the current comic. It helps that it features input from co-creator Kevin Eastman. On the other hand, Nickelodeon’s version of April is a teenager and uses a laptop. Nick’s website once listed April’s laptop as a “weapon,” but now it’s listed as “gear.”

Whatever. I’ll still give the new cartoon a chance. It’ll be just another face added to the many personae of Ms. O’Neil:

Mule of the Day: Saddle up with Elvis!