Roshawn Rochester, creator of Anatomy of War, shares his experiences at LBCC and its Artist Alley:

The Long Beach Comic and Horror Con was AMAZING! I had so much fun! From the friendly staff to the new faces and people we’ve met in Artist Alley, this was one of the coolest conventions I could’ve ever hoped to be a part of. It all started on a Friday for us. My wife and I left at 4 o’clock in the morning and we arrived in Long Beach a little after 10:30. From there we made our way to our hotel and then to the convention center.

We made our way down the familiar escalator to the convention center floor. I’ve never seen it so empty. There were a few people around as the floor was being setup. We asked a few of the people where we could start setting up. One man let us know that Artist Alley was not ready to be setup yet. With that, we left to go watch a movie across the street. We chose Paranormal Activity 4 since it was just about to start. Let it be said here, this is probably the worst out of all the Paranormal Activity movies. But I digress.

We left the movie theater when the movie was over and headed back to the convention center. Artist Alley was still not ready so we called it a day and planned to come by early in the morning. At that point, we retired back to our hotel room for the night. It was a VERY long drive. 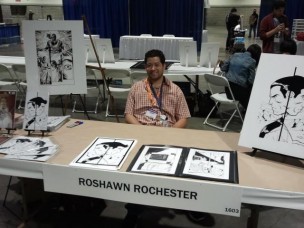 The next day started and we were all a buzz with my first ever day behind the table! It was going to be fun! We had to make a quick run to Target first but we were well on our way! We arrived at the convention center to set up. The whole floor was buzzing with people. People were setting up exhibitor booths and laying everything out for the weekend. It was so cool to be able to see how everything was being brought together. We quickly made our way to Artist Alley.

Upon arriving in Artist Alley, we were able quickly find our booth. We immediately started setting up. We took everything out and started laying it on the table. My wife came up with the wonderful idea of putting down a thick paper table cover so that people can sign it. After laying it down and placing things the way we wanted, we waited. We didn’t talk for a few minute. We were completely silent in anticipation. Then we heard it over the loud speaker.

“The convention floor is now open.” We were both giddy! People started walking by almost immediately. One of the first people to come to the booth was Matt Dunford! It was extremely cool to meet him for the first time and he’s one of those people I hope to work with soon. It was a little bit of a blur after that. People would come up and ask about the book and I would explain the concept to them. Then more people would come by and I would explain some more. Some people would buy the book and some wouldn’t.

It was so much fun just being able to talk to them though! We even got to meet some really cool people like Jennifer and Veronica! They were extremely nice people! Everyone was extremely nice. We even had the team of Sebastian Kadlecik and John Bring (Penguins Vs. Possums) come by. They were very cool and laid back! I even bought the second issue of PvP. It is sooooooo good!!!!

And then Rick Basaldua came by and opened up the world of possibilities! He was very outgoing and talked with any and everybody that came by. It was so much fun! People that would usually just walk by decided to stop by just because of Rick. He was truly a fun guy to be around and it was wonderful to see how he acts behind the table. VERY COOL!

Soon after Rick left, we had a slew of people come by. Two of those people just so happened to be the Blue and Green Samurai Rangers from Power Rangers Samurai! I couldn’t believe it! These guys were very awesome and down to earth. I nerded out…BIG TIME. They even signed my table! 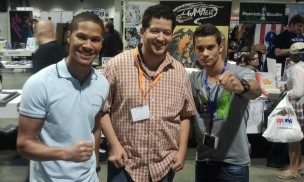 And the day wasn’t even over! A bunch more nice people came by and we had a ball with meeting everyone. I even got to stop by the Elephantmen booth to see the fantastic writer and font artist Richard Starkings. He’s another wonderful person to see at every convention. I can’t say enough good things about Elephantmen. The fantastic story and characters have you loving them the minute they show their humanity. Round it up with the amazing art and you have a truly wonderful book that leaves you wanting more after every issue. That was my first day at Long Beach Comic and Horror Con. It was fun and I couldn’t wait for the next day!

Day two came along and was every bit as exciting. We started out by going to the various shops we saw coming in. I bought Ant-Man Season One for $14 and a Frank Quitely Elephantmen t-shirt for my wife. I am a little upset because I want one now! I WILL get that shirt soon! After our shopping was done, we headed back to Artist Alley so that we would be ready when the show opened. We got there just in time.

We got to our table and took a few more pictures. Shortly after opening, Rick came back over! It was fun time again! It was his birthday and he came by the booth that day anyways. Like I said, he’s a REALLY cool guy! He talked to people and we even got the chance to give away some one-of-a-kind items that he drew for the book! The ladies that came to the booth from the day before (Jennifer and Veronica) walked off with a 1 of 3 poster board photo of Rick’s variant cover signed by Rick himself. It was really cool to be a part of something that made other people happy.

It happened that more and more people came by throughout the day. We were having fun. And then an amazing thing happened. J.T. Krul (Captain Atom, Fathom, Green Arrow, Mindfield which is a personal favorite and MANY more books) came by the table! He bought an issue of Anatomy Of War! I tried giving it to him and he wouldn’t accept it. He is too nice of a guy! I was super stoked! That basically ended my second day at LBCC and it was a GREAT way to end my time at the convention! I had so much fun and I can’t wait to get on to the next convention!

Roshawn & artist Luisa Russo made Anatomy of War, a new adventure with an anti-cancer theme. See the 6-page preview of Anatomy of War and let Roshawn know if you liked it.

Finally, a video of random fun and cosplay at LBCC 2012 by YouTuber piratesavvy07: