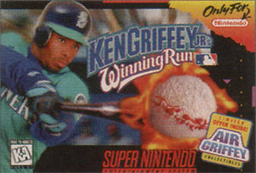 1996. Many baseball fans are back to loving the National Pastime after the 1994 strike. My beloved Braves finally give the city of Atlanta its first major sports championship in 1995 after beating the once-woeful Cleveland Indians. The Yankees are back into prominence. Nintendo must have been pleased at the Seattle Mariners’ advancing to the League Championship Series. Mariners advance when Griffey scores the winning run…BOOM! Nintendo’s going to cash in!

Ken Griffey Jr.’s Winning Run on SNES is Nintendo’ 2nd of many games starring Griffey. In this edition, British developer Rare was enlisted to create the Major League experience. Rare, as one of the best video game devs (Donkey Kong Country series, Goldeneye a year later) at the time, did not disappoint. Winning Run is not a hardened sim, but Rare did not play very loose with the rules of baseball. These features were cool for a 1996 console game:

I really liked making trades through season mode. Seeing visually different pitches thrown at different speeds and paths was a treat. It was awesome hearing the music when hitting home runs & grand slams. Most of the power hitters have cartoonish (but appropriate?) bulk. Rare really managed to balance realism with arcade gameplay. After being disappointed with Tecmo and EA’s efforts, Winning Run is the best baseball game on Super Nintendo. Leave a comment if you disagree or even agree.