I had the pleasure of interviewing a very talented artist, Robert Valley. The Canadian artist’s big break was working on Aeon (Æon) Flux. He did the character designs for Disney’s Tron: Uprising and Motorcity. On Disney XD in the U.S., viewers see the angular fruits of Valley’s labor back-to-back Thursday nights.

Valley made the life story of his friend, Techno Stypes, in Pear Cider and Cigarettes. He’s using Kickstarter for funding. After watching this video, I found brash Techno to be more compelling than Beck and his journey on Uprising.

In this interview, Valley answers questions about his work with Disney, Peter Chung, Jamie Hewlett, and his self-publishing efforts.

Red-Headed Mule: Congratulations on Tron: Uprising and finishing the first book of Pear Cider and Cigarettes. Did you consider any other sources of funding before going to Kickstarter?

Robert Valley: Thanks, its been a busy year. I have been driving up and down the west coast frequenting animation studios and art schools talking about my work and doing book signings after. I call it “back of the truck distribution” More often than not people would suggest doing a Kickstarter project. After a while it stuck.

RHM: Did Techno ever mention where he gets the audacity, for lack of a better word, to continue his lifestyle?

RV: Techno was born with big balls, and liked to pull them out even when he was crippled and had no business doing so. He got off on it.

RHM: While Techno became a millionaire, did he ever hold a job before or after the settlements?

RV: He sold tickets on the street for a comedy club, going up and harassing strangers. That was before the settlement.

RHM: How do people react when you present Techno’s life story?

RV: Generally they think I made the story up.

RHM: How much of Massive Swerve is biographical?

RHM: What is the earliest drawing you can remember making?

RV: it was a Captain America drawing.

RHM: What were your influences in animation, comics, and art?

RV: Peter Chung and Jamie Hewlett, with a bit of Mike Mignola and a hint of Milo Minara. All poured over a big pile of Frazetta.

RHM: What are the tools that you use for PC&C and Massive Swerve?

RV: Massive Swerve was all paper and pencil. Pear Cider and Cigarettes I want to use my Adobe Master Suite, Photoshop, Premier and After FX, I am convinced I can do a whole film with that. Using my Cintiq as well. 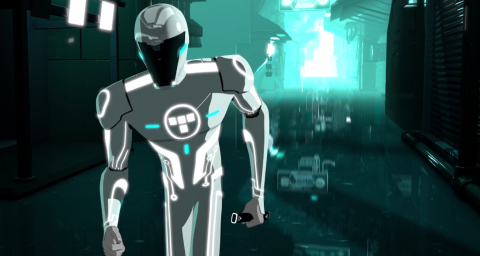 Were you conscious of Aeon Flux while designing the Tron: Uprising characters? I was recalling AF while watching the pilot episode.

RV: Yeah people keep mentioning Peter Chung, he had a huge impact on my drawing.

How much did the movie Tron: Legacy affect your choices in Uprising?

RV: The wardrobe for sure. More simplified bolder lightlines. We looked at both Tron movies.

What other concepts did you have designing Beck’s Renegade suit?

RV: I had some real shitty ideas, then [art director] Alberto [Mielgo] made it look cool again.

How much latitude did Disney give you to design the Tron: Uprising and Motorcity characters?

RV: It seemed we rarely had any pushback. Charlie (Bean) was determined to make a bold stylistic statement. Motorcity was easy, I only spent 2 weeks on that at the beginning put Chris P was awesome to work with.

Do you have a favorite episode of Aeon Flux?

RV: I think its called “Gravity,” where she has to keep shooting that plug. So clever. [Actually, the episode is “Tide.” – CR]

Do you still keep in contact with Peter Chung?

From your animation work in Tron: Uprising, Motorcity, Aeon Flux, can you recall any ideas that you liked but weren’t used?

RV: I kinda threw it all out there, saved the rest for my book. Now I gotta find some more.

Have you played The Beatles: Rock Band or Dance Central?

Has anyone from the Beatles contacted you about your animations from The Beatles: Rock Band?

RV: You mean Ringo or Paul? I wish.

What were your inspirations for the Gorillaz “On Melancholy Hill” video and especially Cyborg Noodle being a 3D model?

RV: I take little or no credit for Gorillaz stuff, All I do is move those characters around. Its all Pete C and Jamie H.

Gorillaz ‘On Melancholy Hill’ from Passion Pictures on Vimeo.

Have you done art for the Winter Olympics in Vancouver?

RV:  I did some pitch work for the BBC but that didn’t fly.

Are you planning on going to any conventions soon?

RV: See you in San Diego. or France.

You’ve traveled to places such as China and the U.K. What’s the best city you’ve visited?

RV: London suits me quite well. Love those people. No surf though.

Do you have any other comments?

Thank you, Robert! As of the date the interview’s posted, Robert’s about halfway there to reach his $16,500 goal to fund Pear Cider and Cigarettes. As with all Kickstarter projects, anyone pledging at certain amounts and the goal is reached will receive bonuses. Check out his art on his official website and also his Flickr page.