You’ve seen adventures where someone, like the damsel-in-distress or even the hero/heroine is bound and/or gagged. If that’s your fantasy then here’s a lady and her photographer who could make it a reality.

Contributors to nerdbondageprojeKt get to decide what she gets to wear. Choices in the running include:

What follows is a chat I had with both over a calm Thursday night (for me, at least). They’re very engaging and I’m pleased to have been in the company of some charming people.

Red-Headed Mule: Anyway, first, how did both of you meet?

Lela Gwenn: Um… I Interceptioned myself into his memory.

RHM: Seems interesting. Where did that take place?

LG: Yeah. We’d chatted a bit on Twitter and a Modeling website that we are both members of and eventually set up a photo shoot at NYComic Con. (he thought we met in Portland. We did not) (thus the Interception joke)

RHM: Ha. Was there cosplay involved in the shoot?

LG: Nope. We had a sorta plan… it kinda fell apart in practice. We were limited on time, I’d been carrying my stuff around the con all day. He’d just gotten off a plane from California…. it wasn’t ideal.

RK: But you had the great hat.

LG: I don’t think any of those pictures made the light of day.

RK: Really? I thought I sent you some.

LG: Nope… I’d definitely have some up. Too ridiculous not to!

RK: I’ll grab some from the file and send them later tonight.

As of Sunday, Richard’s away so we don’t have the hat pic. – Ed.

LG: But that’s why I wanna do this nerdbondageprojeKt. No rush- fun costumes- and everyone feeling their best.

RHM: Okay. Lela, how are you going about running nerdbonageprojeKt different than your last campaign?

LG: Well– giving more control to the donors. They get to vote on which characters are going to see film.

2– I’m a little less frantic. I was doing 3 or 4 videos a week last time– I think people got tired of me!

RK: IN fact, I’d like to shoot both digital and black and white film.

While this pitch is for her previous campaign, the video below is an example of Lela’s artfulness.

RHM: Do you have a strong preference, Richard?

LG: And the charity part– giving time to re socialize dogs– I think it makes a big difference for people

RHM: Lela, what’s the most difficult piece of gear to get for your potential shoot?

LG: If Kaylee gets picked… I have no Idea how the hell Imma make longsleeved overalls sexy. But hey… that’s my job. But once you have a good team… the rest is cake.

RK: For film I use and ancient Holga with an instant film back. Also an old Polaroid ProPack camera. It was popular with journalists in the 80s. For digital I mostly use a Nikon D700, but when traveling I’ll often use an Olympus OM-D E-M5. I also use Nikon flashes, though not always in conventional ways.

RK: The artist Chris Coop uses a ProPack too. And everyone seems to be using Holgas and Lomos these days. Dianas are popular too. SOme people use them well. Other use them as toys and will forget about them in a month.

There are so many digital filters that wil make your digital shots look like they came from a crappy camera so why will most people go to the trouble of dealing with film? FIlm isn’t cheap these days.

RK: Each instant film frame costs at least $1 so if I’m experimenting it’s easy to blow through $50.

RK: But unless I have a new idea, I stick to some techniques I’ve developed over the last few years. It’s one of the reasons I like B&W instant film. You get a negative and can scan or abuse that for differeent looks.

RHM: That’s interesting. Lela, have you shared any ideas with Richard about how you want to be shot?

LG: Not really. For me it’s a “in the moment” thing. I think Richard & I got along pretty well last time, he’s a pro and I trust him. I ask him what he wants to accomplish on the day– and then I try to get what I want to do across. It really is a collaboration. Modeling has prepared me well for comic book writing ;)

RHM: Cool, Lela. Are you working on a comic script now?

LG: I have a couple things working. Some anthology pieces with GrayHaven and Adam Knave is editing the script for my first big project so we can make a go of it.

RHM: Are any artists assigned yet?

LG: Yeah. Matt Spicer is doing the art. He’s like me– a fresh face ( read: green fucking newbie) but I dig his style and we get along really well.

RHM: That’s cool. Richard, are you working any comics scripts?

RK: Nothing at the moment. I’m talking to people at the moment but notihng is solid. right now I’m rewriting my standalone fantasy, DEAD SET. After that I’ll get started on the new Sandman Slim.

RHM: Ok, Richard. Lela, are you planning to have your comics published on print?

RK: I’m happy about DS too!

LG: I’d like to. I’m old fashioned that way…. but reality is well.. real. And making a buck or two would be nice.

RHM: I understand that.

RHM: Richard, how does writing the comic Accelerate compare to writing novels? 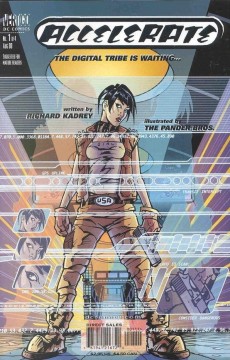 RK: Comics are pretty stripped down compared to novels. In a novel I can spend a page describing a pancake if I think it’s important. Not so much in a comic. But I like the visual aspect of storytelling in comics.

If you looks back at Accelerate, you’ll see that each issue has fewer and fewer words. I was getting to the Kubrick idea of letting the images carry as much of the story as possible. It’s a fairly big leap for a novelist.

LG: I’d agree with that. There’s a lot more pressure to show and not tell. And anything that isn’t critical is GONE.

RHM: Question for both, what’s the best use for rope?

LG: For the purposes of fetish photography- If you have a good rigger, Shibari is really gorgeous. It creates beautiful shape, line and color contrast

RK: The rigger is key.

LG: For the fetish itself Rope is a means to an end. Constraining. Hobbling. Limiting. Creating boundaries for one partner where the other is unlimited.
I prefer rope because it works but it is comfortable- where chain or duct tape can be very UN comfortable.

RHM: What was the experience like the last time you worked with chains, Richard?

RK: I don’t work with them except for dog leashes. Any other use just reminds me of a cheap Roger Corman monster movie.

LG: Right? It’s like a “this is what we * think * kinky shit looks like WHIPS AND CHAINS!”

RHM: Do either know of hangouts for indulging in bondage and fetishes?

LG: Yeah. There are places that cater to the kink community. I will not be sharing my hangouts… I don’t need any exciting surprises.

RK: I’m going to have to get running soon…

RHM: Okay, Richard. Do you have any other thoughts to share?

RK: I hope the project comes together. I think it will be fun for both the participants and the people receiving shots.

LG: Thanks for everything Richard! You are awesome.

RK: Right back at you.

RK: Thanks for taking the time for the interview.

RHM: Lela, what’s the earliest moment in your life that you knew you’re a geek?

LG: Oh gosh. I was born this way? My earliest memories were stealing my Dad’s horror comics and watching cartoons.

RHM: What are your favorite cosplays?

LG: I really liked doing Maria Hill… but only the nerdiest nerds knew who she was at the time. Doing the genderswap Gambit at NYCC was awesome.

RHM: Whoa. How long did it take to make the Gambit costume?

LG: Actually.. It wasn’t too bad. I got inspired by a roll of purple duct tape I just happened to have. So I covered a vinyl corset I had in the purple duct tape and it just kinda went from there.

RHM: I assume you didn’t have to work on your French.

LG: hahaha. I just grunted a lot. hahaha! And called everyone ‘cher.

RHM: What was the last convention you’ve been to?

LG: NYCC was the last one I went to. Convention seaso is starting up again tho! YAY!

RHM: Oh, cool. Do you have any tips for bondage novices?

LG: Always trust your Top ( the person tying you up) Know your safe word and know what your limits. If you aren’t comfortable- Stop.

RHM: What are your plans for world domination?

LG: First: Comics and Modeling Next: all of Publishing. THEN THE WORLD! :D

RHM: You’re lovely and you’ve been lovely to chat with me. I’m wrapping things up here, so do you have any final thoughts?

Lela can be found on Twitter @LGwenn and on Facebook. There’s also her site, Full Frontal Fantasy.

Richard has his official site and a selection of fetish photography is at Kaos Beauty Klinik (NSFW).