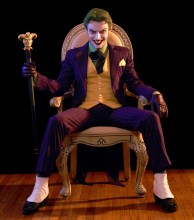 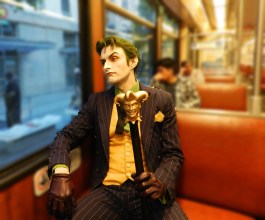 Red-Headed Mule: What got you into cosplay?
Harley’s Joker: Ever since childhood I found myself going all out for Halloween, I think one day I just realized comic conventions were another opportunity to have some fun dressing up.

RHM: How do you describe cosplay to someone who isn’t into cosplay?
Harley’s Joker: Halloween in Summer without the candy.

RHM: How do you feel cosplay has changed in the years since you have started?
Harley’s Joker: I haven’t even really been doing it more than a year. My first public appearance at a convention as the Joker was at WonderCon in Anaheim, March 2012. I’m still in a lot of ways being introduced the whole culture.

RHM: Do you make your own costumes? If you do, what led you to start making your own?
Harley’s Joker: It’s a collaborative effort. I do all the designing in detail, measurements, drawings, etc, and then often either create or fiddle with the patterns which are all created from scratch on paper.

Sometimes the patterns come from me finding something at a thrift store that really catches my eye, some part of it at least, and then butchering it and taking it apart and using elements of it for the patters. 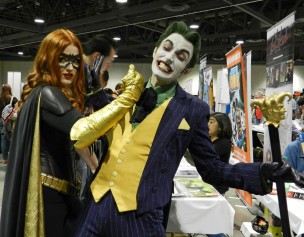 I also find all the fabrics, and often dye the fabrics (for example my vest fabrics – front and back – and the fabric that I made the vest button covers & pocket square with were all dyed twice, as well as the fabric used for the green shirt cuffs, that was dyed and then I went in with some pens to highlight all the petals in the floral pattern with yellow). However I cannot sew, thus I work with someone who can. What led me to it? I suppose just the need to be working on something, a creative outlet of some kind.

RHM: I’ve seen in you in person and I really wish a lot more people got to see you. What made you want to portray the infamous Joker and how did you come up with the concept you ended up using?
Harley’s Joker: I think it was just a combination of my love of the character and one day noticing a slight physical resemblance. I grew up on Batman. The movies came out when I was a kid, Batman: The Animated Series was on television at the time, and I was always an admirer of the comics, though admittedly more for the art than the writing seeing as I was an artist drawing all the time. It was inevitable.

Had I grown to be taller and more muscular (with a less villainous face) I probably would have made a batman costume.

RHM: How much time and effort do you put into a costume?
Harley’s Joker: It’s hard to say, the Joker costume was made and fine-tuned over the course of about 9 months (leading up to San Diego Comic Con, July 2012), however even since then I’ve still made a few tweaks here and there. As far as effort goes I don’t think it can really be measured.

When I’m working on a project all my spare time gets poured into it. I’m an extremely passionate person, and creativity is what drives me. You give me something creative to work on and I’m dedicated to it one hundred percent.

RHM: Nowadays, you see people on YouTube and Instructables creating costumes for people to mimic. Do you think it has become more socially acceptable now that superhero and anime are getting more and more popular?
Harley’s Joker: I think there will always be creative ways for people to have fun and express themselves, there will always be fans of those expressions, as well as people who don’t understand it.

RHM: Do you happen to follow the Batman comics right now? If so, or if you used to, what would be your storyline?
Harley’s Joker: I’m not very good at keeping up to date with a lot of media. There are a number of television shows I watch, but not a single one regularly. I forget when there on, or simply don’t prioritize my life around them.

It’s the same way with the comics. I’m always catching up, years behind everyone else, however when I hear a lot of chatter about something in particular, rave reviews, etcetera, it gets my attention and I look into it.

RHM: What is the costume that you are most proud of?
Harley’s Joker: The Joker. However several years ago I made an amazing Michael Jackson costume for Halloween. Unfortunately there are no photos of it anywhere, but it looked great. Michael was about the same size as me, just an inch taller and a couple inches narrower. As a child I taught myself to dance like him, never really lost the knack for it since, so it was an appropriate fit.

RHM: In the case of getting ready for premieres/conventions, what do you find to be the best source for a costume being showcased in that setting?
Harley’s Joker: Work on something until you’re impressed. If the costume doesn’t blow you away, how can you expect it to blow anyone else away? One of the greatest things about cosplay as an art form is there aren’t really any deadlines.

It’s not like anyone’s paying you to finish something by a certain date, so there’s no need to rush. Work on something relentlessly, if you don’t wear it this year, you can wear it next and it’ll be ten times better than it would have been now.

RHM: At some conventions, you go and see a huge number of people in costumes. Some make sense, some don’t. But there is always a select few that stick out.

Keeping that in mind, besides creating the costume, what else do you feel goes into a successful cosplay?
Harley’s Joker: You should never forget to play it up for the cameras. I could stand plainly and grin, but if I use my entire body as an instrument to convey an emotion or vibe, I’m more likely to leave a lasting impression. That’s something you learn as an actor, more specifically if you ever do any sort of mime training; your entire body is an instrument to emote with, don’t just rely on your voice and face.

RHM: What is your dream project?
Harley’s Joker: To simply make my living working in the film industry, either in front or behind the camera, maybe someday both.

RHM: Do you plan on attending any conventions in the near future?
Harley’s Joker: The next con I plan to attend is WonderCon in March 2013, which will again be in Anaheim, California. Then in May I’ll be attending BigWow! in San Jose, California. In July I’m hoping to return to San Diego Comic Con, and I absolutely LOVED Stan Lee’s Comikazee this past September in Los Angeles, so if I’m lucky I’ll get to go again.

RHM: Do you have any suggestions for those that would like to participate in cosplay?
Harley’s Joker: Have fun and don’t be afraid.

RHM: If you could cosplay with any one famous person (living or dead) as a character they portrayed or opposite them, who would it be?
Harley’s Joker: I just think it would be funny to play Jeff Goldblum’s son in something. Our voices are so similar, and I even look a little bit like a short version of him. I’d have a blast daily.

RHM: As one in your position, I am sure you have more than your fair share of loyal fans. Do you find it to be difficult to market your cosplay talents?
Harley’s Joker: I got very lucky, and that’s really all it is. The only real effort I’ve had to put into the “marketing” of it all is finding new stuff to share online every day or two.

RHM: If you could actually BE any character in real life, who would you choose and why?
Harley’s Joker: Tony Stark. I wouldn’t have to change my first name, I could still be sarcastic, and I’d have billions of dollars combined with genius engineering capabilities.

RHM: Do you have a favorite movie, comic or book series you wish to expand your cosplay on?
Harley’s Joker: There are several characters I’d love to recreate, however when and how is a completely different story, so I won’t say for now.