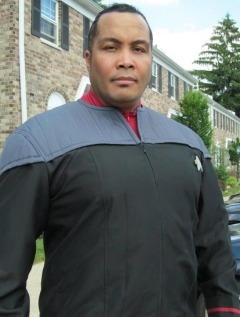 Red-Headed Mule: What got you into cosplay?
Eric Moran: I was into costuming before it was called cosplay here in America. I would watch shows like Shazam ,Batman Spiderman or even Star Trek and would want to dress like them. It was always something noble and heroic about them. I wanted to be and look like them.

RHM: How do you describe cosplay to someone who isn’t into cosplay?
EM: Cosplay or costuming is when a fan dresses up like their favorite character from comics, movies, TV and becomes that character.

RHM: How do you feel cosplay has changed in the years since you have started?
EM: Cosplay has become much bigger, mainly because pop-culture is more mainstream now. Where before if you wore a Star Trek or Star Wars costume at a Comic-Con or movie premiere, you
were look as weird, a geek or a nerd. Now it’s common place and now people want to get pictures and think you’re cool as hell.

RHM: What led you to start making your own costumes?
EM: Some of my friends like, Brin Londo, Anthony Le, Sid Garrand, Norman Antonio, Dale Harvey, John Clark, Markus C Cayetano and many, many others had made incredible costumes and props. That motivated me to want to make my own props.

RHM: How much time and effort do you put into a costume?
EM: To make a really good costume, it can take me anywhere from 2 weeks to six months to get a costume right, and yet I still try to make improvements to it until I’m very happy with it.

RHM: Nowadays, you see people on YouTube and Instructables creating costumes for EM: people to mimic. Do you think it has become more socially acceptable now that superhero and anime are getting more and more popular?
EM: I feel that it has become an acceptance for people to chat about costumes and props via, Youtube, Facebook etc. Now that the public have embraced superheroes and the world of pop-culture into their living-rooms.

RHM: What is the costume that you are most proud of?
EM: I have so many costumes , that it’s hard to pick. If I was to choose five , it would be my Black Adam, War Machine, M. Bison , Gears of War, and Iron Man 2.0 costumes.

RHM: In the case of getting ready for premieres/conventions, what do you find to be the best source for a costume being showcased in that setting?
EM: In getting a costume I want to cosplay for a con or a premiere , I do a lot of research online as well as watching how the costume looks on t.v or in the comics.

RHM: At some conventions, you go and see a huge number of people in costumes. Some make sense, some don’t. But there is always a select few that stick out. Keeping that in mind, besides creating the costume, what else do you feel goes into a successful cosplay?
EM: When you cosplay at a con, it’s all about attitude becoming that character and conducting yourself. If you’re dressed as Superman or Capt. America be Superman or Capt. America.

RHM: What is your dream project?
EM: My dream project is getting a whole bunch of cosplayers together and make a fan-film which I did called “Final Escalation” and “The Legion of Injustice”

RHM: Do you plan on attending any conventions in the near future?
EM: Some of the cons for 2013, I hope to be attending are Wizard World Philly, Dragon-Con, Monster-Mania, NYCC and that’s just to name a few.

RHM: If you could cosplay with any one famous person (living or dead) as a character they portrayed or opposite them, who would it be?
EM: I would like to cosplay as a Predator or a Clone trooper.

RHM: As one in your position, I am sure you have more than your fair share of loyal fans. Do you find it to be difficult to market your cosplay talents?
EM: The only thing that is hard is when I’m at a con and I get stopped every two minutes to get a picture with someone (which I love); the only sad thing that in the process of getting pictures taken with fans, I miss other cosplayers I want to get pictures with.

RHM: If you could actually BE any character in real life, who would you choose and why?
EM: I would like to be War Machine/Iron Man 2.0 , because I can relate to the character. He’s from Philly and he’s was in the military like I was.

RHM: Do you have a favorite movie, comic or book series you wish to expand your cosplay on?
EM: I would like to cosplay Master Chief from Halo as well as the Predator , I plan on working on the costumes.

RHM: Do you have any suggestions for those that would like to participate in cosplay?
EM: To anyone who wants to cosplay, know the person you are cosplaying just don’t be on the ban wagon . At the end of the day , have fun.