Let’s commiserate, Atlanta sports fans. Yet another major Atlanta-based blunder with the Braves squandering the magical goodwill from Chipper Jones’ final year. Don’t let those spiteful sportswriters get you down!

Yes, this listy list contains mostly stuff from the 1990s and after. I’m not compiling every run-of-the-mill fail an Atlanta-area sports team achieves.

Win one for Chipper? Yeah, right.

The Infield Fly Rule did not do the Braves in. They could’ve scored two clutch runs in the seventh to get some momentum back.

The playoff format isn’t an excuse. If the Braves had survived a best-of-three then that means more tired pitchers for the big series against the Washington Nationals.

No, the Braves, having home field, should’ve sent a message to everyone that they were to be feared in the playoffs with a retiring Chipper Jones.

I won’t discuss the 1998 Super Bowl season at length because the ecstasy of reaching the Super Bowl in the first place overcomes the ultimate game result and Eugene Robinson’s pre-game indiscretion.

Blow a late fourth-quarter lead at home to America’s Team? What a fairy-tale story for the Dallas Cowboys! La dee da dee da!

The franchise’s only division championship and playoff appearance. Atlanta’s love affair the icemen was all swept away by the New York Rangers. Blueland was never the same.

Yeah, let’s blame the fans because the Atlanta Spirit, as owners, are entitled to leech off the fans’ hard-earned money.

Remember when the Atlanta Knights won the Turner (heh) Cup way back when? I barely do.

“See you tomorrow night!” are jubilant words for Twins fans, but are haunting for this Braves fan.

There’s also the 1996 World Series where the Yankees grabbed the momentum of the series from the defending World Champion Braves.

Anyways, thank you Braves for at least getting one championship. 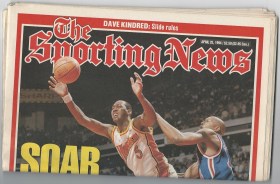 It’s the wide-open Jordan-less 1994 NBA with Dominique Wilkins‘ final season in Atlanta. What lame end of an era; the Human Highlight Reel didn’t get a proper goodbye. One of the most inexcusable trades ever occurs when the Hawks traded Nique, his expiring contract, and a first-round pick to the Clippers for only Danny Manning’s expiring contract.

So many things wrong with the trade: making a major move with the Clippers and the trade being unequal. The Hawks management shouldn’t have done the trade, let the talented Hawks roster play out, and tried to trade up in the draft for someone who didn’t have a me-first reputation (Grant Hill, but we don’t the hindsight to know how injury prone he’d be).

The top-seeded Hawks still lost before the conference finals like the Atlanta playoff teams before and after them. Danny Manning decided to be second banana to Charles Barkley in Phoenix than be a leader in Atlanta. I hate that trade.

Ugh, I’ve cleared much of that game away from memory. The Falcons kept up with Green Bay’s attack in an earlier regular season, but the dreadful playoff anti-magic worked wonders again.

I’m very relieved that Mike “No screen pass in my playbook” Mularkey is Jacksonville’s problem now. Don’t get me started on the lame 2 point effort against the Giants. I’ll see whether the Falcons will bounce back by hoisting the Lombardi Trophy after this season.

The season where Vick had his leg broken in the 2003 preseason? I’m not going to list every occasion a sports team had a losing season because of their star player’s major injury.

His time in prison is cathartic to setting up a grand era of consecutive winning seasons, which was never accomplished before the Mike Smith/Thomas Dimitroff era. No way a Bobby “Quitter” Petrino/Mike Vick era could produce similar results.

At this point, I would be very happy with an Arena Football or WNBA championship. Neither team couldn’t even get the job done for a mid-sized headline in the Atlanta Journal-Constitution sports section. Ugh.