I’m a newbie to the urban fantasy genre, but Gail Z. Martin’s Deadly Curiosities was a sometimes pleasant, sometimes eerie stroll through one the Deep South’s most interesting cities. At over 360 pages, Curiosities is the first major story in a greater narrative. I may have to read the Adventures short stories if I ever have time.

Martin gives readers plenty of magical strangeness with hints of splendor. The heroine is capable, but isn’t impervious. I must get accustomed to 300-plus page adventures where no stone is left unturned, but I think urban fantasy readers will enjoy Martin’s work.

Cassidy Kincaide owns an old shop, named Trifles and Folly, which buys and sells assorted antiques and knickknacks. The store’s true purpose is to uphold a family tradition: she takes in haunted items so that it can be “removed from the market” and ensures no one is hurt. She and her assistant, Teag, come across a pair of opera glasses which is the darkly magical catalyst for a mystery involving sunken treasure, wary spirits, and brutal creatures of the supernatural. 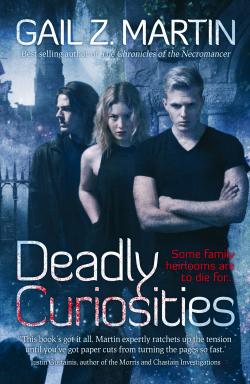 Cassidy herself can get visions through touch, enabling her to visit past memories. Meanwhile, Teag is a “weaver” who can access the most obscure information on the Internet. By themselves, they can’t confront the root evil which infests the Charleston Navy yard. Their big help is an immortal vampire named Sorren, who’s familiar with Cassidy’s family. Other allies include a lady Voudon wielder, a battle-worn Russian, and one late-arrival whose no-bull demeanor is a welcome contrast.

Through Cassidy’s first-person narration, readers become basically visitors to the “Holy City” of Charleston, South Carolina. Outgoing and lacking angst, Cassidy has a solid network of local businesspeople. Charleston is persistently creepy, but many of the people are aware of its long history of ghosts. The further Cassidy explores the horrific whodunit, the more foreboding the places she visits become.

Scenes involving spooky encounters and Cassidy’s visions are written more for atmosphere and mood than whiz-bang impact. Cassidy is already toughened through previous experiences with the paranormal, but Curiosities pushes her and her allies to their limits. Her referencing past adventures fleshes out the character without being a painful load of gratuitous continuity (unlike SOME comic books I’ve reviewed).

Curiosities climaxes where the villain’s forces and our heroes have a near-chaotic battle of dark versus not-dark. Here, Martin does not resort to ridiculous solutions; Cassidy’s group uses their respective talents, but the thrilling interaction of powers means no one’s leaving the battle unscathed.

As I write this, Martin’s having/had a launch party to celebrate Deadly Curiosities’ release. I’m not present for most of it, but Martin should be pleased with her final product. Excuse me, but I must take a vampiric daytime rest.

Thanks to NetGalley & Solaris Books for providing a review copy.

Read another excerpt from Wattpad.