Brief thoughts that I decided to combine for in opinion piece. As far as these three things discussed go, I just ain’t feelin’ it. Now, my more grammatically-correct commentary: 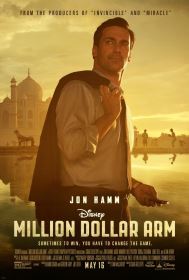 Tsk, tsk, Disney. No disrespect to Jon Hamm, but he could be the genuine focal point of a bajillion movies. But from what I’ve read about Million Dollar Arm, the real stars, two Indian cricketers-turned-baseball players, aren’t given enough focus. No, the poster doesn’t give much confidence to see the movie.

I feel similarly about The Blind Side starring Sandra Bullock and (sigh) whats-his-name. It’s an okay movie when getting swept in the moment. Afterwards, I thought about how movie is a acting highlight reel for Bullock at some expense to her co-stars.

Mad man about Mad Men I may be, but [insert corny baseball pun here] about Arm.

Watching Assassin’s Fist from beginning to end takes over two hours, but some stuff could’ve cut out. The series is an origin/prequel story about Ryu, Ken, their master Gouken, and his brother, Gouki. The first few episodes, while supposedly about Ryn and Ken training, is an excuse to show off the beauty of natural Japan. The bulk of the movie is a slowly moving origin story about how Gouki became evil. The climactic stuff had soem life but I was relieved when the last episode ended.

Beyond “because the mythos says so,” why is Gouki so obsessed with learning the dark art of Satsui No Hado? What does “Assassin’s Fist” even mean? Who thought a groan-worthy sequence involving another beloved Capcom classic was a good idea?

The fight choreography is decent, but sparsely meaningful. Capcom, I respect you for embracing unofficial/fan-made projects, but I can’t get behind the umpteenth Street Fighter IV title. At least the sponsor, Honda, is apropos.

I’ve been following some crowdfunding projects lately, but this one is absurd. Ian Tuason, a pro poker player with nowhere near the renown of Phils Hellmuth or Ivey is planning to shoot a documentary of his play during the World Series of Poker main event. The effort is a possible violation of Indiegogo TOS and would get him kicked out of the WSOP as recording video of live play isn’t allowed.

But no worries! All of your pledges ensure that you get a tiny fraction of his winnings. Since his campaign is fixed funding, he’ll take whatever monies he can to fund another big tournament if he can’t reach the $10,000 needed for the WSOP buy-in. BTW, his techniques TOTALLY won’t open the possibility for cheating.

Unsurprisingly to poker followers, there’s much ballyhoo in the Two Plus Two forums about this. You won’t see much debate from me; this scheme is a lame gamble. If he somehow gets to shoot footage, it’ll just look painfully awkward.