Has there ever been a great comic about a major American wrestling company? The track record suggests a mixed-at-best history. There was Valiant’s WWF Battlemania featuring the art of Steve Ditko, Marvel’s WCW comic, and the more recent WWE comics. However, a “Super Genius” hopes to excite wrestling fans who read comics.

This noirish crime thriller set in Titan City may be more laughable than exciting. The WWE Superstars fighting terrorism premise of Big Apple Take Down is slightly more intriguing.

WWE Superstars #1 is the first work of Papercutz imprint Super Genius. One thing that will grab attention and sell copies is that Mick Foley handles writing duties. Superstars #1 comes in several covers. I bought the one with Mark Henry on a rampage, paying homage to Amazing Spider-Man #316 and done by Michael Golden. 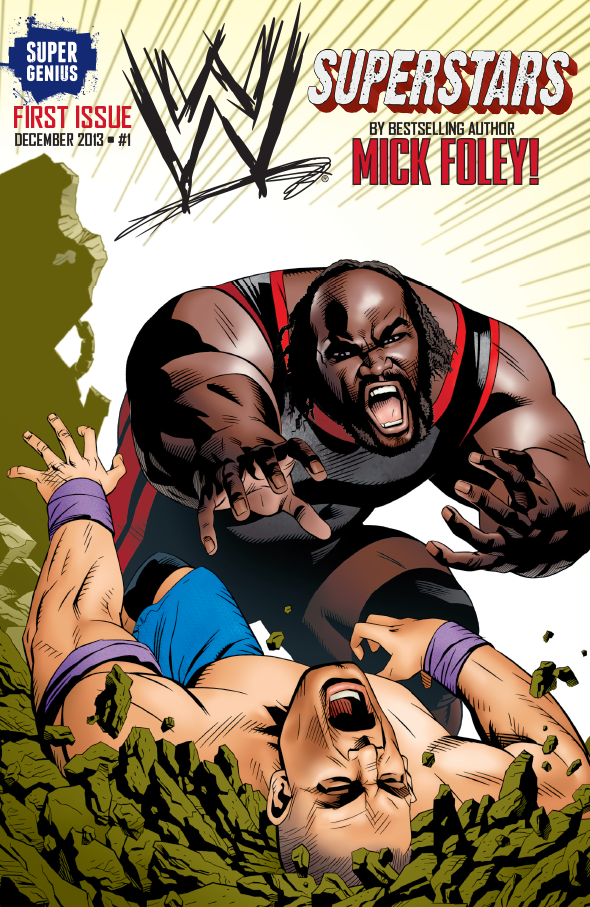 Mark may be WWE’s Predator, but the head placement is ridiculously low. Either the head should be higher, or his black should be more sloped. Otherwise, it’s pretty cool to see the results of John Cena not paying his air bill.

It’s Another Installment of “As the Bell Rings”

Many of the WWE roster is in this issue. They take the roles of law and order, loose cannons & wildcards, and heavies. Maybe the crime story-living sections of the WWE Universe will be enthralled with Captain Christian, beat detective Dolph Ziggler, kingpin Paul Heyman, and Miz the broadcast journalist. Maybe they’ll enjoy the cheesy puns, catchphrases, and generic tough talk.

From reading details and reviews of Big Apple Take Down, I wonder if Rudy Josephs is game for another story about the WWE roster as action heroes.

I got some chuckles from WWE Superstars #1. The first page already has me giddy from its dialogue. For example, how can he be a “cerebral assassin” if he’s “too smart for mind games?” I know, something-something-sledgehammer-Pedigree-blah-blah, but there are already plenty of schemers and Triple H only stands out with his family ties.

The first few pages is a challenge to put as many catchphrases-as-character-beats as possible. Ryback doesn’t look freakish enough. I wanted Hornswoggle and the Great Khali, who are given descriptions in the after-story character section, to be random comedy relief. Alas, they don’t appear.

Rey Mysterio, Vince and Stephanie McMahon, and Kane are among the people not in this issue. There are only so many characters to cram in 20 story pages.

The artwork is okay. Many of the superstars, whether a plot-mover or a fleeting cameo, are presented accurately. Ryback, however, looks a bit too normal. There’s one decent fight scene involving the Wyatt Family. Otherwise, the action going from panel to panel isn’t as fluid as I’d expected from a story based on pro wrestling’s daredevil antics. Jay Jay Jackson’s colorful shades capture the near-noir mood well.

Also, the arm placement of Randy Orton is awkward. Shouldn’t his other arm be raised too? 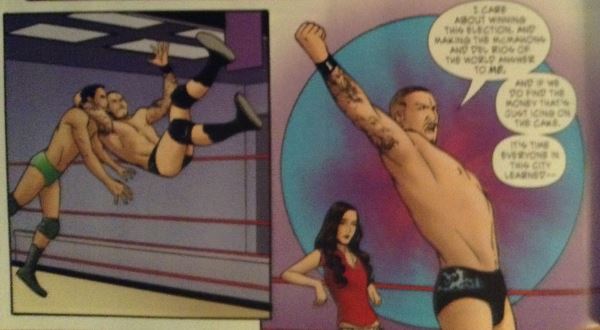 WWE Superstars has potential for much unintentional humor. Three-hour Monday Night Raws are already messy. I don’t know if I have time for more of this comic.