Writer Dan Slott uses some compelling hooks to keep Spidey interest high in Superior Spider-Man. How brutal will Otto Octavius get as Spider-Man? Who will find out that Spider-Man’s acts of belligerence aren’t Peter Parker’s?

Otto Octavius is the memorably amoral scientist experimenting with the whole superhero act. I use the word “superhero” and not “hero.” Otto lacks nobility and mercy so he isn’t a true hero. This guy shoots Massacre (who is only implied to be dead) then beats Jester to a pulp. On the other hand, Otto tolerates the costume and identity as if it were ceremonial.

Captain America of the Avengers is the latest to suspect that something’s wrong with Spidey. Wolverine pleas to his peers that hey, we’ve all done some avenging some time in our lives, so cut Webhead some slack. This conflict will probably end with Spider-Man losing his Avengers membership, but not letting anyone know that Otto’s the man behind the madness. Gotta keep those sales rolling, after all.

I didn’t look forward to Superior #6 because of the penciler. As one guy I know likes Humberto Ramos, I’ll be nice and say this: as long as I’m not staring at the faces, my reading experience is fine. Also, having comedy-themed villains irritating Spidey in Superior Spider-Man #6 helps. These two buffoons, Jester and Screwball, represent the shallow social media celebrity that aims for viral stardom. At least they put more effort into their act than some Internet Tough Guy cobbling together some weak image macro. 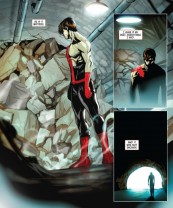 While Spidey may have been too rough on Jester, I can’t sympathize with their not-so-innocent hacking of government information. Maybe I can cut Otto a tiny bit of slack. In his failure to stop Ultron single-handed in Superior Spider-Man #6AU, Otto starts to grasp that being a hero means putting away ego and that being part of a group isn’t a liability.

The New York City justice system is lax toward supervillains. The city itself provides an environment that would breed them. Ah, the fun of monthly comic books’ lack of finality. Mayor J. Jonah Jameson wants a 10-year sentence for anyone using a superpower in a crime. That decreed isn’t explored much. I find the Spidey-JJJ interplay more riveting than Mayor Jameson.

Out of all the major superheroes, Spider-Man’s troubles has me entangled the most.

Thank you for reading. Stick with Red-Headed Mule by subscribing to our RSS feed, following our Twitter page, and Liking our Facebook page.