What I got from this issue is that the villains are making power grabs against a merged Avengers-X-Men team. Wolverine may settle for the sidelines. I just shrug. But, oh, man, does Doctor Who #1 have some competition in the variant cover madness!

With those eleventy-billion covers, including a Marvel babies cover, it’s more like Marvel-at-our-collectability-NOW, am I right?

Ahem. I stayed out of the Avengers vs. X-Men mega-series, so I may have not the best grasp of Marvel continuity. Remender creates some informative background; I’m not completely lost after finishing this issue. I’m still trying to find out the big picture beyond “bad guys begin to create major threat and only the new mega-team can stop them.”

The issue is framed by bookends: the first story page shows some hands operating on the brain of Wolverine while a goat head and another guy look on…

Uh, wait, that’s not Wolverine. Is that Cyclops with the Phoenix-filled eyes? Hmm, no, he’s clean shaven and in a held in a different room. Wow, I couldn’t make out who the guy was at first.

(After another reading of the big scene with Cap and Thor, the guy in the beginning was AVALANCHE. But why him?)

Anyway, the next few pages has Wolverine reminiscing about and giving the eulogy for Professor Xavier. I can understand Wolvie being more emotional than what I know of him, but I hope this isn’t the start of his new emo-pouty phase. His work at the Xavier School is the reason Captain America and Thor won’t include him in the new mega-team. Okay, then. Off to save some lives after Avalanche terrorizes a random street y’all go.

Who does Captain America recruit to lead? Alex “Havoc” Summers, who helps Cap and Thor in the effort against Avalanche. Havoc argues with Cyclops about Cyke’s betrayal, but Havoc’s reluctance at leading the awesome Marvels hasn’t sold me that he’d be a great choice.

Meanwhile, Rogue and Scarlet Witch get catty before an explosion goes off and a five-fold force beats them and carries them off to the sunset. These villains are a goat-faced girl, gargoyle lady wielding the living wind (that wind says “I LIVE TO ATTACK”), insect dude, and the grown-up, mythological, fisticuffs turtle. Zero in a half-shell, indeed.

The other bookend involves the power-hungry Red Skull and the body of Charles Xavier. Cassaday does a commendable job visualizing the first and last story pages with gooey brains and red-tinted rooms. within the issue he gives everyone distinct, reasonably human faces. The actions scenes are handled fine. However, Cap shouldn’t have reached his hand off as Avalanche jumped off. It almost makes Cap look like he performed a super-push. 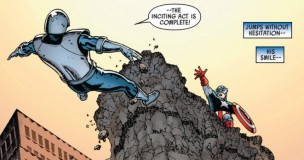 I understand the setting that the characters in acting in the wake of Xavier’s death. The dialogue’s fine. I just didn’t leave Uncanny Avengers #1 hyper and giddy in anticipation of the next issue. As an outsider to Avengers & X-continuity, I hope there’s less angst and better support for Cassaday’s art.