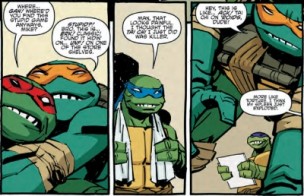 Back to the artwork in a moment. Although I only read the first issue (free but Comixology account required) and haven’t been a serious fan of the turtles in over 15 years, I still recognize some of the elements taking place. The turtles’ characterizations haven’t changed, Casey Jones and April O’Neil have a bonding moment, and Shredder leads the Foot Clan.

A lot of pages are given to Karai and Shredder. Karai tries to prove herself worthy of leading the Foot but grumpy jerk Shredder’s having none of it. The creative team can take their relationship a few ways: either can join the turtles, Karai forms her own group, etc. I’ve read a little about Karai and am not going to read further to prevent spoiling myself.

The Turtles enjoy some leisure time until Casey comes in bruised. Raphael, always the hothead, goes after Casey’s father. Splinter follows him while the others stay with Casey. During the brutal confrontation between Raph and Mr. Jones, there’s a twist of a cliffhanger to actually remind readers that the current stories are not a note-for-note reprise.

Now the art: Andy Kuhn provides plenty of sharp angles and thick lines. However, why must the turtles bare their teeth so much? It isn’t crude yet charming; it’s bizarre. I’ll even suspend my disbelief with the turtles’ chunky limbs knowing that they wouldn’t give them the ideal fighting body.

For a relative newcomer to the comics, it’s recoginizable exposition with little room for surprise. Rating: two hooves out of four (limited recommendation).