Superior Spider Man Annual #1 has an cool fight scene and an interesting resolution to the Blackout vs. Spider-Man fight. When the dust settles, it doesn’t push the arching plot much and doesn’t show off new insights into the mind of Otto Octavius. The recap page and the bits of exposition sprinkled throughout the issue help newcomers who aren’t used to the post-Peter Spidey.

This issue takes place after Spidey disposes of the Kingpin, but likely before any of the Spider-Man 2099 hullabaloo. What’s noticeable in the interior pages is that artwork is more conventional, lacking the stylized renderings of the regular Superior artists and using mostly standard grid-based panel layouts.

Javier Rodriguez and Alvaro Lopez does a fine job illustrating, especially Blackout’s silhouette effects and the intense, climactic brawl. However, there’s something off about the colors that makes the digital pages look more pleasing to the eye. 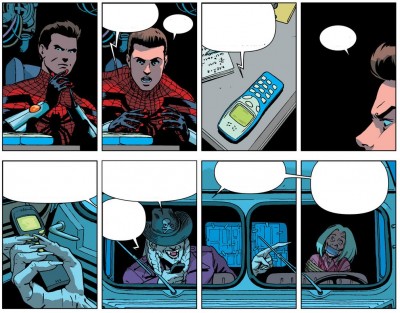 Christos Gage, not Dan Slott, helms the scripting here. Other than Otto blabbering about how he’s INDEED SUPERIOR (he should really get over that by now), I’m fine with what I read. May, her husband, Jay Jameson, and Peter Parker have a quiet breakfast and Peter talks about how wonderful it is to be Aunt May’s nephew. Such a sweet reminder of Peter’s life that could be in any Spidey comic. Otto’s personality eventually bubbles up.

The conversation between Spidey and Danny Ketch suggests that Blackout may be a Ghost Rider villain. Ketch advises Otto that he may have to go for the kill. The vaguely vampiric Blackout cloaks his surrounding in total blackness and finishes off his targets with his fingernails or teeth. 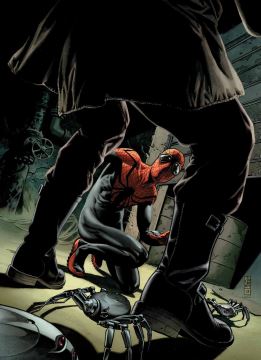 Given nature of the villain, nowhere in Superior Annual is the nature of the soul discussed. In Otto’s egotistical quest to save May, one can infer whether the former Doc Ock is truly seeking redemption, but I’m guessing that long-time Superior readers already made up their minds about Otto’s morality.

The highlight of Superior Super-Man Annual #1 is the big fight with Spider-Man versus Blackout. Conventionally structured within panels or splash pages, the visuals show the Spidey’s fury and Blackout’s eagerness to notch the webslinger as his latest victim. The climax is amusing in that Spidey employs a “scientific” tactic instead of lawful arrest or brute force. May witnessing Spidey perform his tactic is somewhat horrific and a bit funny.

The last page reminds readers that a major villain is yet to do battle with “improved” Superior Spider-Man. As a reader of the first 19 issues of Superior, I find it necessary but how it’s done repetitive.

Textless cover is from the Marvel Database Wikia.