“Darkest Hours,” the new Superior Spider-Man story arc, has arrived. The first part of “Hours” is closer to overcast minutes. All in all, we get arrogant Otto, fanboy Flash, and a bunch of threats on Otto’s life that looming far away.

Artist Humberto Ramos has Spidey somehow tangled in the symbiote? Moving away from the symbiote? The posture of the legs aren’t helping. The main logo is almost lost in Venom’s logo. Some light gray for contrast wouldn’t hurt.

Ooookay. On to the story. 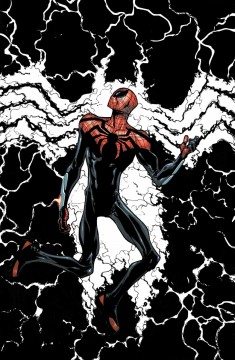 Superior #22 continues the anticipation of who will strike Spidey the hardest. Bemused Mayor J. Jonah Jameson wants Spidey’s authority squashed. The Wraith, having seen Carlie’s apartment trashed and missing key information, just wants him squashed. On the other hand, Flash wants Spidey to just come to an understanding that Venom is a swell guy now.

If you’re into the Otto-as-Peter Parker/Anna Maria romance, you’ll like Superior #23. She makes a grand romantic gesture using her knowledge of bioluminesce. One day, her discoveries could provide an alternate energy source. This day, however, Anna Maria wants a spark: 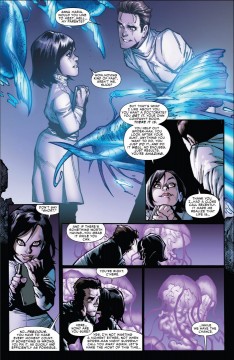 Thankfully, Otto doesn’t retort to Anna Maria’s gushing “You’re Amazing with “No. I am SUPERIOR, my dear.” Otto also doesn’t gleefully cackle, “I AM SUPERIOR!” at the end of the page.

On another note, it took me while to fully understand Ramos’ illustrating Flash neutralizing the henchmen. The angle is a bit off and I didn’t which is which from so much black: the background, the henchmen’s clothes, and Venom and his black webs. 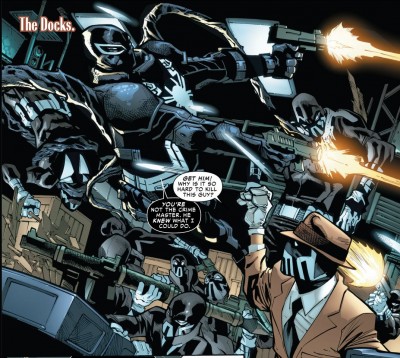 Superior #22 is okay. The full carnage (not the symbiote) from Otto Octavius’ “superiority” inches forward. Are you pleased that everybody’s favorite black symbiote has returned? Are you ecstatic about the variant cover featuring Agent Coulson from the hit(?) TV show, Agents of S.H.I.E.L.D.?