It’s a slim Wednesday for me: just buying Superior Spider-Man #11 & The Movement #2. Spoilers ahead.

The Movement #2: “Eaten From the Inside Out” 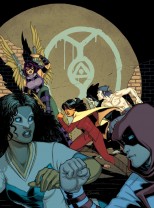 I wanted to like this book. In this issue, we’re given a brief history of a sweatshop factory and some quick background on the protagonists, especially the possessed Burden. The Movement is obvious in its aims to highlight the conflict between the working class and the ruling elite. The heroes want to uproot the existing order, but they’re having a difficult time figuring out its replacement.

Of note is the scene where the two thug cops are imprisoned and even one of the cops brings up a point that Virtue couldn’t come up with a rebuttal.

Meanwhile, one of the heroines, Katharsis, directly confronts the man possibly weilding all the power in trouble Coral City. It would’ve been poignant if she were incapacitated, but she gets to show off her nigh-invincibility surviving shocks and bullets. How did she get super-endurance? I don’t know. At best, I’ll wait for the trade to see how the story resolves. 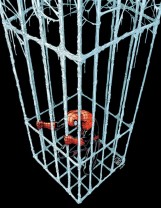 I’ll admit it. If even the Lizard is still standing after killing a child and Alistair Smythe just now having his day of execution then having Otto Octavius running around acting as the “superior” Spider-Man is an acceptable part of the Marvel Universe. Having murderers fester around is a sad reality of many long-running superhero narratives. Also, a justice system that would function “normally” for us mere mortals seems too slow and accommodating to supervillains.

Otto is pissed at being confined to the life of Peter Parker (or most encounters with an authority figure, at least), but he still manages to get much of the advantage against Smythe. One exception: Octavius didn’t account for some mini-Slayers helping some of the other villains. Spidey should be really, REALLY frustrated after seeing his foes and knowing his plan to isolate Smythe wasn’t foolproof.

Superior #12 promises for a major fight between the Spider-Slayer and the smug Webslinger. Satisfying that may be, will anyone else get closer to finding out Peter Parker’s fate? Should I continue Superior Spider-Man after giving it six months? Whatever happens, it’s been an interesting “experiment” to read it.