I’ve looked forward to Seconds since consuming the Scott Pilgrim franchise, graphic novels, the game, and the movie. Whether this story becomes a phenomenon, I’m unsure. Bryan Lee O’Malley blends elements of romance, science fiction, and horror while having an abundance of symbolism. For example, much of the story takes place in the snowy winter where isn’t just the weather that gets cold.

Where Scott Pilgrim is a love story wrapped in video game bravado, Seconds is a love story steeped in mysticism and folklore. This is not Scott Pilgrim for foodies. The most interesting relationship arises not between the flame-haired protagonist and her love interest, but a growing bond between her and an unlikely naif.

O’Malley utilizes his trademark manga-esque artwork, but he has a solid handle on the gloomier scenes. While Seconds is a quick read, O’Malley uses black panels for good effect. As the lead character is selfish for much of the book, I was left wondering if she had truly earned her happiness. 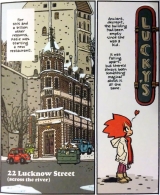 Katie Clay is winding down her tenure as chef of Seconds, the restaurant on top of a hill where customers dine on exquisite dishes. Katie, a spunky redhead, still has feelings for her ex-boyfriend Max but is also having her own restaurant built at a decrepit building under the bridge on Lucknow Street. However, after an accident occurs on a hapless waitress, Katie discovers in her apartment a magical mushroom which will reverse mistakes, given they’re explicitly written down, after eating it and having a night’s rest.

That sole mushroom was provided by the mysterious Lis, a blonde, sickly-eyed girl who was gracious to Katie. Later, Katie discovers a store of mushrooms and finds a cauldron. Against Lis’ wishes, she persistently uses the mushrooms and cauldron to get out of whatever is troubling her and/or get closer to Max. Katie, still coping with adult responsibility, doesn’t understand the major repercussions of her greed at first. 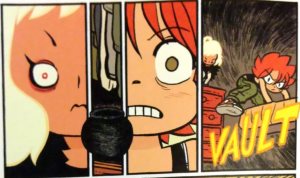 Going through her various outcomes, her life isn’t a Groundhog Day trap, but creates an advancing horror. Katie stubbornly refuses to abide by Lis’ rules, but also learns about Lis through the hapless waitress, the sweet Hazel. Hazel performs a ritual that somehow contents Lis, but mushroom-munching Katie undoes the goodwill. As long as Katie gets her man…

Katie, as designed, has a sardonic attitude and cutesy look. The cover of Seconds is a bit odd: it makes Katie look diminutive doesn’t assert what the book is about. Also, she acts too cynical to be truly kawaii. 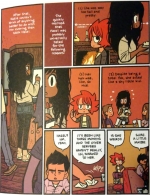 O’Malley uses a diverse cast in ethnicity and shapes for Seconds. It’s cool to see even if some of them aren’t well-developed. Regardless, Seconds is driven by Katie. Katie’s desires is all wrapped up in the new restaurant and Max, but important relationship is between Katie and Hazel. Hazel is seen as the shy, tentative waitress no one really likes. A friendship forms when Katies understands Hazel’s odd methods.

On the other hand, winning Max is simply a goal for Katie to achieve. Somehow, some way, Katie finds ways to screw it up. That relationship is more about Katie reacts than a character study of Max. Katie finally realizes the uncertainty of life and is at peace, but there’s the implication that she will mature as she settles into her new status quo.

Seconds is O’Malley making a statement that he’s moved on from Scott Pilgrim. The graphic novel’s over 320 pages and may make pleasant afternoon reading. I’m not super-adept at finding Easter eggs, but I didn’t realize who would show up at a fine dining restaurant…