**SPOILERS**
Part two of this three part arc is gearing up to be phenomenal! With so many things happening in the world of Elephantmen at once, Richard Starkings has made another storyline apparent within this months’ issue. With the introduction of time travel coming to light a few issues ago, and the death of a then unknown character, Starkings builds on the mystery surrounding the victim as well as the murder of Sahara, Obadiah Horn’s faithful and pregnant wife.

Time travel, in general, is a hard topic to cover in a comic book. Mostly because it usually doesn’t pay off or doesn’t live up to expectations. Mr. Starkings has laid the ground work so far in advance that he pulls it off extremely well.

Ladronn, as always, compliments the writings of Richard Starkings with the beautiful artwork all Elephantmen have come to know and love. His extreme attention to detail of each character, and the scenery they are portrayed in, is nothing short of incredible. As I have said before, this is one book I never miss and the reasons for me to keep getting it, just keep piling up each issue. 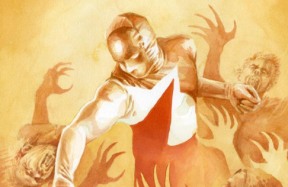 I have to say that this was a very intriguing story! AfterMan issue one follows a young man, Greg Martelli, that seems to not know his way in life. After facing the fact that his mother no longer recognizes him, Greg leaves her at the nursing home and tries to make a new life for himself in the official home of his idol, AfterMan, where he gets more than he has bargained for as he comes face to face with him on his first day. Long Beach is now the site of a war zone. AfterMan is battling for his life and Greg can do nothing but watch as his idol takes on possibly the greatest threat of his life.

Old College Comics has created a new and inspiring hero with AfterMan and takes the art direction to a whole new level with the multiple uses of different styles. I can’t wait to see more from them.