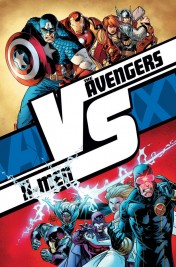 AvX: VS Issue One is GREAT! Whoever thought to actually take the individual fights being fought and put them into their own mini-series’ had the best idea ever. it’s so hard to leave things like this out, but a mini series all its own is definitely worthy.

Match One: Magneto Vs Iron Man!
This is probably one of the most impressively orchestrated fights I’ve seen in a while. Right off the bat, I am sure everyone thought “Iron Man can’t POSSIBLY win! He’s made of metal!”. Like I said, this was VERY well thought out. Iron Man wins this round but only because Magneto can’t recover from the feeling of entire planet that was just consumed by the Phoenix.

Match Two: the Thing vs. Namor!
I am ALWAYS down for a Namor and Ben Grimm fight! They knock the door off the hinges REAL quick! The first page of the match is the first punch and The Thing gets his chest ROCKED (hehe)! Words are said, punches are thrown, breaths are held (for a looooong time) but, even with a giant sea creature to aid him, Namor is no match for The Ever-Loving Blue-Eyed Thing!

Before I head into the final part of the review, I wanted to say that another GREAT reason to pick this issue up is the AvX Fun Facts that are put into the panels. Some of them are down-right silly, but need to get their point across. I think that this series is pretty much telling us to expect the unexpected when it comes to the match-ups.

So far, nothing has been cut and dry and no one has won in any way that you would be able to think up so far. Case-in-point, Magneto loses to Iron Man because the suit he wears doesn’t have metal in it and Namor loses to The Thing IN THE OCEAN…HIS OWN DOMAIN!! It’s like Aquaman losing to ANYONE in the sea. But it’s happened. I can’t wait to see what happens in these next few issues!