This time, here are all of the news about Elephantmen, Todd McFarlane, & Ghosted worth braying about!

Richard Starkings’ Elephantmen will reach the hallowed half-century mark with the 17 July release of Elephantmen #50. 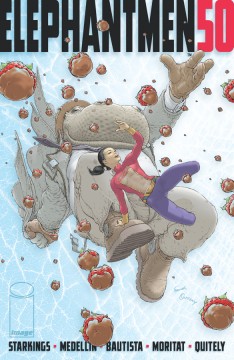 “Fifty issues! One more and Elephantmen is as old as I am! When we launched the series in 2006, I thought maybe I had six issues in me, yet here we are, seven years later and six ELEPHANTMEN collections in stores and another in preparation for release this summer!” says Starkings, creator of the comic and owner of the lettering service Comicraft.

Frank Quitely will do the cover of the issue, story titled “Blue Collar Blues.” Art duties for this ish will be done by Alex Medellin and Gabe Bautista. According to Image Comics, “[‘Blues’] brings the story into the intimate sphere of one Elephantman, following his everyday life with its struggles and small triumphs.”

Elephantmen #50 is available for pre-order in the May issue of Previews (Diamond code MAY130418).

Hopefully our own Roshawn Rochester will cover this special issue as he has reviewed several recent Elephantmen comics.

EWU will have “Road to Creative Autonomy, an Evening with Todd McFarlane” at Spokane’s Red Lion Hotel at the Park from 7-8 p.m. Those paying the $15 admission or using their student Eagle Card ID will also receive a special Spawn comic with a EWU Grad Special cover.

RSVP to Friday’s event at alumni.ewu.edu/mcfarlane.

For students in the College of Science, Health, and Engineering and the College of Arts, Letters and Education, McFarlane will also be the keynote speaker at the commencement ceremony on Saturday, June 15 at 2 p.m.

“Criminal mastermind Jackson T. Winters has spent the last decade languishing in prison after his last heist went horribly wrong. Now, in return for breaking him out, a rich eccentric tasks him with capturing a ghost for the millionaire’s macabre collection in the new Image Comics/Skybound mini-series GHOSTED.” – Image Press Release 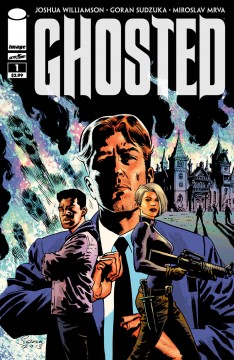 Writer Joshua Williamson looks forward to blending the crime and horror genres for the upcoming Ghosted #1, to be released 10 July. He especially doesn’t mind Ghosted being “gritty.”

“For years my obsession has been to do a book that took place in a haunted house; a crime and horror title, one that was fun but went to some dark edgy places. ‘Gritty’ has become a sort of pop word to describe a certain kind of book but it really is the best way to illustrate Ghosted.”

Assisting Williamson is artist Goran Sdzuka and colorist Miroslav Mrva. {Note to self: need to find pronunciation guide.] Fatale’s Sean Phillips will do the covers.

Williamson enjoys delving into what he characters he describes as “the underbelly of the crime world” who are “tortured, and are kind of jerks.” If you, dear reader, like that type of darkness, Ghosted is for you.

Ghosted #1 is available for pre-order now in the May issue of Previews (Diamond Code MAY130405).