Written and Drawn by Thom Zahler.

Bookworm Twilight Sparkle does a task for Princess Celestia: visit and check on the ailing Summer Mane, the royal archivist. Summer Mane is a surly grump giving Twilight a hard time and saying her name incorrectly. Twilight’s burdens include library chores and sharing her love of books, and her favorite author, Jade Singer. Cheerful Twilight just won’t go away easily. 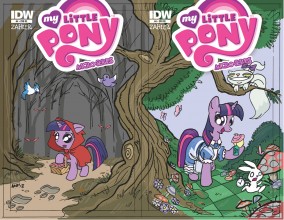 Zahler (Love and Capes: What to Expect) renders Micro-Series: Twilight Sparkle closer to the animated series’ style than main series artist Andy Price. His equestrians and backgrounds make Micro-Series: Twilight Sparkle seem like the Friendship Is Magic cartoon brought to print contrasting Price’s more interpretive illustrations. There are many pop culture gags, recent and old, peppered throughout. Pun lovers will get a kick out the book titles like Canter in the Sky and I Have No Snout Yet I Must Whinny.

Micro-Series: Twilight Sparkle is unsurprisingly kid-friendly, but even I, a one-man show running this website, am pleasantly reminded about being sociable and knowing when the youth deserve respect. Readers who love literature and libraries will be satisfied that their passion is affirmed in this one-shot. Jade Singer’s one-and-done literary career reminds me of Harper Lee and leaving the limelight after To Kill a Mockingbird. On the other hoof, the whereabouts of Jade Singer is easily surmised. Also, Spike fans will be disappointed as he doesn’t factor in the plot.

Micro-Series: Twilight Sparkle is enjoyable and light-hearted. I was worried I would be let down. As far as spending a hard-earned 399 cents, if anyone outside of Friendship is Magic fandom chooses between this or starting the main IDW series, I’d pick the latter.