Special thanks to the MLPonies message board, especially the person who didn’t get my humorous criticism about the mule.
This site is called Red-Headed Mule. Get it? ;-)

“The Return of Queen Chrysalis” published by IDW.

Forget Star Trek/Doctor Who. Forget Judge Dredd. This explosive fantasia from Equestria may be the IDW comic of the year. Die-hard bronies and other MLP aficionados must make a cross-country journey to collect the plethora of alternate & variant covers on display! Hold on to your hooves! 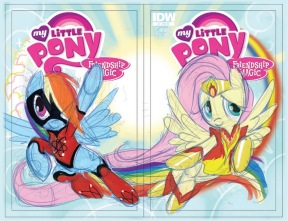 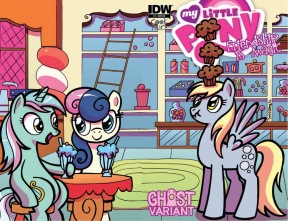 Anyways, MLP #1 stays true to the show and isn’t inappropriate. As far as I can tell with my limited experience watching to cartoon, everypony’s in character. No nasty surprises that’ll make readers vomit on that precious glossy paper. Unless they’re a pony-hater. In which case, they’ve wasted $4.

That meanie Queenie has made infected most of the pony population. Her dragons have also fillynapped poor Sweetie Belle, Apple Bloom, and Scootaloo, who were just trying to get their zoology cutie marks. It’s up to Rainbow Dash, Applejack, Pinkie Pie, Twilight Sparkle, Spike, and Fluttershy to overcome the dragons and get the horsies back to normal.

In the back-up story: “How Much Is That Pony in the Window?” by Katie Cook, Rarity and Pinkie Pie have some fashion-related hijinks.

When I say it isn’t inappropriate, I mean that little kids may quickly flip the pages because some parts are quite talky. MLP #1 is like a cartoon captured in comic book form. There’s lots of comic mischief and amusing facial expressions done at the right moments. I like Fluttershy being a variation of the coward adventurer trope. The only potentially offensive thing, other than a possible allusion to drunkeness, is a slam against mules. I’ll have to talk to Katie about that…

…and she responded! Read this interview with writer Katie Cook!

Anyways, if you are one of the filly faithful, you won’t be disappointed with this comic. If you’ve a younger member of MLP nation, then he/she will like it. I hope you don’t bust your flank to get a copy.