Prisoner Ratfink Angel escapes underground with the help of rats and insects. Meanwhile, Dredd investigates a gang breaking in to a chemical plant to steal chemicals to make dope. Most of the gang attempt to flee but Judges’ bike cannons stop them. The others are inside the plant, possibly near the aquifers.

Trevallion’s fight scene with the Judges versus the chemical thieves has some awkward angles. However, I’m amused by seeing Ol’ Stoney Face sneer, bark, and growl orders. Also, you’ll have to decide whether the crude lettering is apropos or off-putting.

Coleby discusses altering his style to remove wasteful lines and improve his storytelling. Coleby shares his personal history of reading comics, from the works of Marvel to 2000 AD & Warrior. He lists his influences as Frank Frazetta and heavy metal-related art, the latter of which opened the door to his working in comics.

I’m eager to see his drawings in the new “The Simping Detective” story which is written by Si Spurrier and is coming in October.

Psi-Judge Anderson finds elderly Alice Cring at the Mysteries Club who provides a lead to the monster Anderson saw in the mirror. The freaky monster is an ancient statue that’s making people engage in beheading each other. One confident rookie judge suffers the company of Mrs. Cring.

In this adventure, even the rookie Jays have weary faces. Cook contrasts the trippy rainbow backgrounds some monochromatic backgrounds for an interesting crime drama palette.

Jake and Callie confront the hitman with sneaky moves and counter-moves. I will admit I haven’t been following this graphic novel closely. If you’re reading “Snapshot” to find out more about “The Bank” then you’re going to be disappointed.

Jock discusses how much realism he had to incorporate to the movie’s version of Mega-City One. 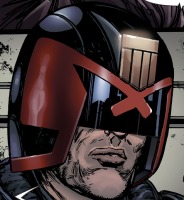 This prologue is not essential to enjoying the movie, but it’s a decent background on how the movie version of the Mega-City One characters differ from the comic versions.

Before she was Ma-Ma, Madeline was a prostitute living with her pimp. One day, her boyfriend picks her up and shows off a new drug to her. Soon, the pimp knows his hooker isn’t making money for him and soon kills Madeline’s friend. As revenge, Madeline gives him a sample of the drug and the pimp dies.

I don’t know whether Henry Flint was avoiding legal issues or couldn’t properly capture Lena Headey’s looks, but Ma-Ma looks inconsistent from page to page. Otherwise, the art’s okay in conveying the realism of the Dredd movie. It’s not like you’ve no chance to view the comic…ahem.

This story is about rookie Judge Webb hesitating at a critical moment. Webb chases a perp but could not finish him off as the perp flees on a hoverbike. Murphy craftfully handles the tension of both a standoff between the Judges and perps and Judges Dredd and Webb. The ambiguous, but thoughtful, ending isn’t a resolution, but I desired more of Murphy’s adventures of Webb, or more rookie adventures as an alternative.

Written by Gordon Rennie. Drawn by Paul Marshall with greytones by John-Paul Bove.

Serial killer Ernest Koonz is introduced with statistics of his many murders. Fittingly, he assess his victim’s intelligence before killing him. Koonz and other nasty characters are being whisked away to a lunar territory. Dredd’s invited, too. This gathering is the apparent work of Global Psycho.

It’s likely unintentional, but “Elite” features one key element in the comic book version of Judge Dredd: sentient droids. Here, a spherical droid who’s a big fan of Koonz assists his getaway. While there’s nothing cute or corny about killer droids, the adventure’s premise would be too ambitious for an initial attempt at a mid-budget Dredd movie franchise.

Anyway, Bove’s smooth greytones enhance Marshall’s art. I’m also amused by seeing Dredd briefly take on the Pagliacci case. Will there be mild comedy relief in the next episode where Global Psycho plans some sort of competition with Dredd contesting the assembled creeps? Probably not, but this adventure made a successful launch.

After reading these separate interviews conducted by Michael Molcher, I appreciate Urban’s candor and Garland’s reasonable thought processes writing the film. It’ll be interesting to see Urban acting within the constraints of his helmet.

Dredd has surpassed the 1995 movie in the eyes of many, but Stallone’s movie is a low hurdle to clear. When the time comes, I’ll see whether Dredd is a compelling movie on its own.