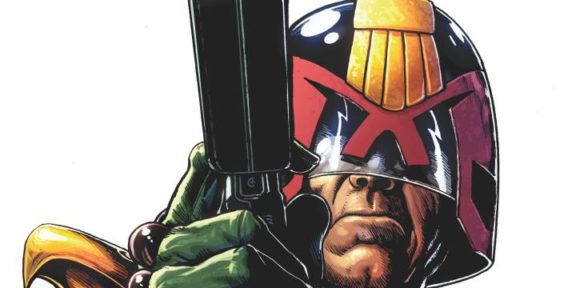 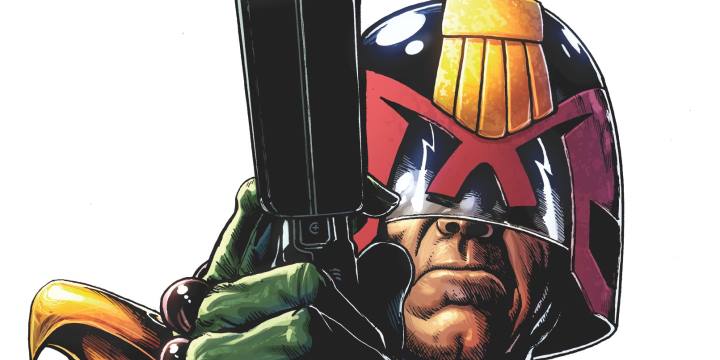 A review of Judge Dredd: Mega-City Two: City of Courts issues #4 and #5.

Writer Douglas Wolk and artist Ulises Farinas finish up West Coast duty. Mega-City Two citizens have an anything goes attitude, but the “Dredd investigates baddie” procedural story is a bit prosaic. Farinas, however, never lets up serving a buffet of gleefully twisted artwork.

Enjoying the fourth issue of City of Courts depends whether you’ll tolerate Barry Badger and Foley Fox. Dredd doesn’t have a storied history with sidekicks. In our exalting the tough and gritty, Walter the Wobot almost seems like a bad dream. Barry and Foley are Dredd’s guides through the anarchic Melody Time. They also provide visually cartoony cutaways that illustrate the Melody Time’s distinct environment.

The penultimate episode has Dredd joining up with the legendary Santos, an ex-Judge who “fights for the people.” Dredd is still getting to the bottom of what he’s doing in Mega-City Two. Santos and Dredd do get in a sticky situation after the big shootout. We can’t have any old shootout; it’s presented through Barry’s cam-thingy that turns the combatants into comic strip characters.

In the end, Dredd seeks the Rat Squad (Internal Affairs) and has a target: a gunning musclehead named Slump.

The finale takes place at Lawcon, where con-goers dress all sorts of Judges. Since this is a younger, less wrinkly Dredd, I can only sense his agitation at the nonchalant legality of Judge Impersonation. The highlight isn’t any unveiling of crooked Jays, but Dredd’s pursuit of Slump to save the City of Courts. There’s some resolution to who’s and why’s behind Slump being in MC2, but Chief Judge Kennedy’s motives remain ambiguous.

Reading these issues makes me appreciate Ulises Farina’s frenetic illustrations. In Courts #4, the usual renderings of the characters contrast to the sillier, simpler drawings of Melody Time “toons.” In the last issue, I wonder how his hands don’t wear down while trying to create exciting yet crowded action scenes.

At first, I was amused at how Mega-City Two culture treats everything as show business. However, the theme rarely goes any deeper than quick gags. To be fair, I liked the moments where the usually stoic Dredd gets slightly theatrical.

For the entire series, City of Courts riffs on, but not skewers, West Coast culture. The plotting is meh, but Farinas tries his hardest to give the reader sensational entertainment. For that, I stuck around reading the series.