Here’s the interview with artist/singer Afua Richardson. She may be best known for her art in Top Cow’s Genius, which won Top Cow’s 2008 pilot season and is written by Marc Bernardin and Adam Freeman. In the following, the radiant Afua shares many thoughts about NYC, comics, singing, etc. Afua, a.k.a. Dr. Foo, a.k.a. Lakota Sioux, has a vast internet presence: her main site, her YouTube channel, her PBase page, and her Deviant Art page.

Red-Headed Mule: What was growing up like in New York City? 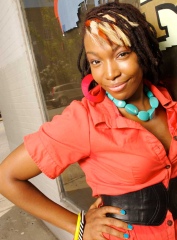 Afua Richardson: You don’t think about living in New York until you leave it. Its a living mechanical organism with a rapid heart beat. You learn to walk everywhere, you learn to stack your groceries quickly ,and you learn when you’re getting hustled or you’ll get hustled often. You’ll also learn that the rudest people in this filthy fantastic city are not actually from NY, they meander in.

In New York you could, at any point, walk into the rummage bin of civilization and they could also be the CEO of the company you’re trying to buy your next gadget from. You spend most of your money paying rent and moving through the subways. You’re moving so fast that , you don’t realize you never save money, and never rest. You’ll realize that racism hides in classist clothing and if you wear sandals your feet are blackened by the afternoon. You’re got access to any kind of food and if you find something in a store there will be another one with your size you can get to.

I hate it and love it i miss it and when i really think about it, don’t. Growing up there…i got comfortable in tiny places, never played outside in my neighborhood or went to pee filled public pools. I also  got to see some of the veins of the city where amazing people float on by. i was lucky and cursed.

RHM: What was the point that you’ve decided you want to become a comic book artist? 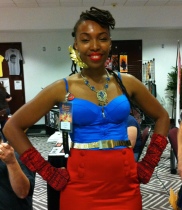 AR: I’m not sure I ever did. Not to say I’m unhappy or ungrateful to be doing comics. But it was never my dream. I just wanted to tell a story. For a long time (and even in many episodes of recent days) I feel like I have no idea what I’m doing. But since I don’t have any rule book to follow, I guess I can’t go wrong.

I started doing comics professionally around 2005 or so. My friend Brandon Graham, was moving to Seattle and thought it would be a great idea if I took over his room for rent and his job drawing comics for NBM publishing. Black and white. 10 pages in a year which was fine because I wasn’t use to drawing anything other than pin ups. Singing gigs had dried up, I was in between jobs and I liked drawing. I thought, “Man it would be cool to draw for a living instead of having crappy jobs or spending a lot of time on the road eating terrible food and being super exhausted…”

It only made sense. Why COULDN’T I do it. All I had to do was get better. I’m better than I was,and hopefully I’ll keep getting better. I’m really enjoying the process of watching my work grow and being a constant student being taught by unlikely teachers.

AR: For a long time, I didn’t know what nation I was apart of. My mother has a way of telling a new story every year so my certainty grew thin until could confirm it via someone else. My Family is Cherokee, a nation that survived a great deal by fitting in during the race wars and race riots and many sadly assisted the puritans to betray other nations before they were taken over and served the same they served to others. My family is rather strange sometimes in that, they won’t talk about our history on my mom’s side even if I ask.

Which I guess is understandable. At a time when being Native American meant you’d be killed was a reality in their lifetime, not speaking about it is not so unexpected. But I read up on as many nations as I could. I noticed the Lakota had a lot of legends laced within their nation. Popularity often leads to a lot of people repeating and even misquoting your story. Which would happen to them often in historical circles.

It reminded me of my family history full of mystery and disinformation. So I gave myself an alias that sounded very androgynous so no one would know I was a chick and would critique my work accordingly.

RHM: Describe the tools you use to make art.

AR: Shiny boxes with light and lead smeared fingernails….No no seriously I sketch by hand using a lead holder pencil and scan it in to Photoshop.  The I’ll drop the rough sketch into Adobe Illustrator clean it up, ink and color it all digitally.  or I’ll occasionally scan some ink smears and turn them into digital brushes so a robot is not replicating my hand strokes for me all the time.  Which I found out the hard way is incredibly time consuming.

RHM: You’ve been in Alabama recently for a Free Comic Book Day signing. How is the Deep South a change of pace from NYC?

AR: I currently live in Tuscaloosa Alabama which is a college town. Its like living in a bubble of delayed time. People here, unlike NY will say good morning and its common to wave or honk your horn at total strangers. In NY that would NEVER happen unless you were trying to be facetious or someone was somehow in your way. ” good morning….jerk…”

I have a place with a lawn (a cement block with a railing was like GOLD in NY) and i grow a lot of fruit and veggies here. I couldn’t so much as have a houseplant because most of my window views lead to a brick wall. BUT, if i walk through my neighborhood i get terrible stares as if this is a terrifying movie where someone gets lynched in the end. Its 2012 and interracial couples can’t walk around without being looked at like aliens. The comic lovers however, are a much kinder and understanding lot. Spending your time far deep in fantasy worlds you can imagine different people together….I imagine.

RHM: Do you currently read other comics or manga? What’s your favorite?

AR: I’m in love in American Vampire right now. Albuquerque’s work is amazing. Its brilliant writing and messy art which i sort of want my work to get back to. I am a painter at heart but had mo money to keep buying cold press paper, so digital had to do.

Saga By Brian K Vaughn & Fiona Staples and anything Warren Ellis spits on.

I’m also watching Bleach and Naruto right now. Bleach is kind of annoying but its consistent so i watch it while i draw. Naruto has really grown on me and i like the character development and the super foreshortened fight scenes. I see it making me draw more interesting angles. Yeah – that’s an excuse I’ll use. I’m also following Batwoman right now.

RHM: How did you come in contact with Marc Bernardin and Adam Freeman?

AR: They sort of came in contact with me if you’ll believe it. In 2007 i took my 1st vacation ever. Where did i decide to go? Comic-Con in San Diego. By then, I was used to walking up to well decorated artists and musicians who had track records the rings of Saturn couldn’t even hold to how they out-awesomed me. I’d find some courage (PR stupidity) to walk up to them and say a word of appreciation. So comic guys were no different.

I took a chance and walked up to Marc Silvestri, and awesomely tall and collected guy who can wear sunglasses indoors and it be cool sort of fella. I remembered that Top Cow is what sort of got me back into comics after I was ensnared by Blade of the Immortal sometimes in high school. I collected when i was a young kid, but Top Cow’s Witchblade & Fathom roped me in. I started drawing Sara Pezzini and all the characters in their universe. Anyway i walked up to him, told him something like “I just told you,” and asked if he had anything to sell that was his that he would be willing to sign.

I hated carrying portfolios around at conventions since I know the objective of most vendors is to sell and not recruit. So i had a postcard with my best pieces on it and a link to my web 1.0 looking portfolio site and said if he was interested in seeing any of my stuff it would be found there. And if not , that’s cool, at cleats I got to chat with HIm and get a new sketchbook signed by the artist. 7 months later, after I’d been fired from my horrible job (big loss there) I was asked if I wanted to participate in a Pilot Season book.

RHM: What’s the status of Genius from Top Cow? 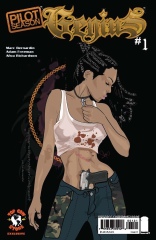 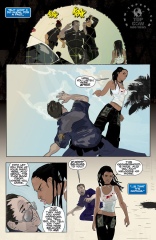 AR: I’m working on issue 4 of 5 at the moment. I wanted to make sure I didn’t muck it up this time. During the 1st two I was going thru an insanely hard time in my life. The work paid for it. But now I hope to be able to tell a better story.

RHM: Out of all the historical African-American figures, which one is your favorite to draw?

AR: Actually, my favorite African-American figure , I’ve not actually drawn yet. Almost out of reverence. When I was a kid I had this paper doll book entitled Black Entertainers. It was a pink paperback 8×11 glassy card stock book of the greats. Louis Armstrong, Ella Fitzgerald, Dorothy Dandridge and my favorite lady in question, Jospehine Baker.

She was a lady, a goofball, a spy for French intelligence and buried with honors, an adopter of children of many different races to prove a point they people are not that different. I didn’t know all that then, she was just the 1st woman I’d seen in a suit. Then from that point on I wanted one. It was the symbol. I’m a lady, in dudes clothes yes, but I’m still a lady in here no matter what. I’ve never drawn her. But I will one day soon.

RHM: You’ve performed as a singer. Have you dreamed of performing at the Apollo Theater in Harlem?

AR: No, not really. I grew up in Harlem. performed at the Apollo with Melvin Van Peebles a few years ago. Fun times ;] I’d love to be in an orchestra again. Perform in Sydney or Japan or in Africa or something. I just wanna create music that inspired people.

Music saved my life. When someone or something saves your life you have a debt. I hope to repay that debt with doing my best to make music that says something. Or at the very least, can soundtrack a person’s life.

Thanks, Afua, for taking the time to answer these questions! RHM bids you much success in the arts and beyond. Readers, check out her artistry at her official site for the latest information.