The day was upon us! The last day of Image Expo! I was so pumped! I just knew today was going to be great. We get down to the hall and are almost immediately let in. But before we would go in, I would ask that the people at the ticket booth take a picture of my family with John Huyler. John was the man that we met when we got there. He was actually working at the convention. He saw our family and our kids reminded him of his. 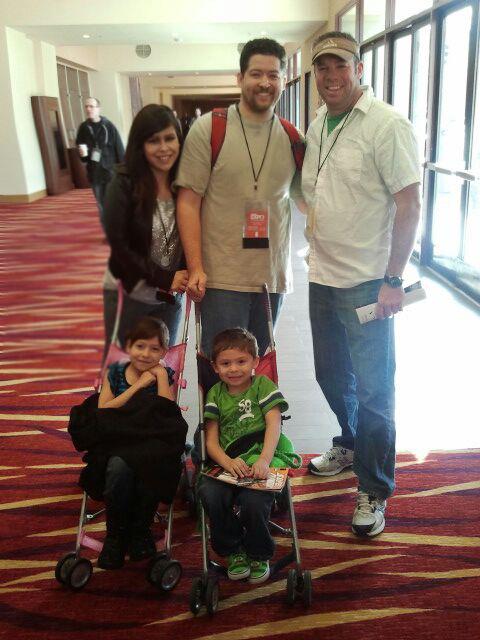 We started to talk and the guy was just really nice about everything. The guy was so nice and just a pleasure to be around so we had to get a picture with him. He had made the weekend a lot better just by being the guy he was. We took the picture and parted ways for a few.
We walked into the convention with our heads held high, just knowing it was going to be a good day. We had planned on a few things already. One of them was to go to the Man of Action panel. My kids love Ben 10 and Generator Rex so we had to go see that. After we walked over to the Image booth, we ended up going to where the panel would be held. There stood John at the front door. We talked for a bit while we were in line, about our families’ military lineage, and he excused himself. He came back a few minutes later to let us in the panel. We walked in and, even though there was a line in front of us, we got in before anyone else. It was awesome! 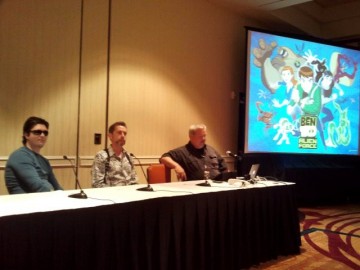 We sat down in the front row, right in front of Steven Seagle and Joe Casey. I was giddy again. I looked over and saw my wife laughing. I didn’t know why. I saw my son listening with intent and my daughter clawed at my arm. My wife then told me that my son had a question. I was floored. I wasn’t expecting it. I talked to him and let him know that they will let people ask questions soon. He waited patiently. After 30 minutes of listening to the two men talk about their current projects, to include Ultimate Spider-Man (!), they let people ask questions.

About ten questions in, my son raised his hand. He had the most serious look on his face ever. He asked “With Ben 10 going to see Generator Rex, can we see Generator Rex go see Ben 10?”. What just happened? My son asked a legitimate question and he is four years old! Why had no one else asked? They answered and let everyone know that Ben is now infected with Nanites so it can happen sooner than we may think. YAY! My son rocks! After a few more people asked questions, it was my turn. My question was directed toward Joe Casey and, more specifically, ‘Haunt’.

“I LOVE ‘Haunt and would like to know if there is a possibility of seeing Kurt Kilgore and Al Simmons meeting before they respectively become ‘Haunt’ and ‘Spawn’? Possibly in a set of stories geared towards their secret missions?”. Joe Casey looked at me and smiled. “That’s a really good idea. *chuckles* I am going to have to talk to Todd about that! I really like that idea.”. Another yay!! I actually “pitched” an idea and they liked it! I hope they do it too. I LOVE that book! After that, the panel was over. I had a sense of fulfillment. John walked up after and said “Way to go big man!”, to my son. This guy is awesome.

Soon after that, my family and I headed to “The Walking Dead” signing…again. We couldn’t get enough of them the first time. Especially since we love the show! So we headed down and got in line, bought our tickets when John walked up. He came right up and said he was going to go talk to them. Here’s the thing people. The autographs are $25 apiece. TOTALLY WORTH IT, if you ask me. To get a picture with them or any other item signed was an additional $25. If I had the money, I would’ve had no problem with that. Well John, forever dubbed “The Man”, helped us out. He walked up to Steven Yeun and Norman Reedus and explained how we were a nice family and how we were good people. He then asked, as a favor to him, o take pictures with us free of charge. These guys didn’t’ even hesitate. All the sudden they came from around the tables and hugged us for our pictures. HOW AWESOME IS THAT!? I couldn’t believe it. I was ecstatic!

And right after this, I was going to be getting in line to see Todd McFarlane for the Spawn statue signing! The day was getting even better!!
As soon as we parted ways, we got back in line to see Todd McFarlane. I was a crazy ball of nerves. This was shaping up to be the convention to go down in history for me. And then, as if God himself had fated for it to happen, the day exploded in pure awesomeness. I turn around and Milo Ventimiglia, YES, ‘Peter’ from “Heroes”, was standing right next to me at the Archaia booth. I asked my wife if I could go get a picture and she shook her head yes. I walked over and pardoned myself, I said sorry A LOT, and asked if I could get a picture. For those that don’t know, I thought he was the coolest guy on the planet! TRULY! I loved that show, along with the rest of the world, and felt it was made for people like me. When he turned around and introduced himself, which was just about the coolest thing EVER (!), I almost broke into a nervous sweat.
I told him how big a fan I was and that I was hoping to get a picture. Without hesitating, which seems to be the theme here, he said “Anything for a fan, man.”. 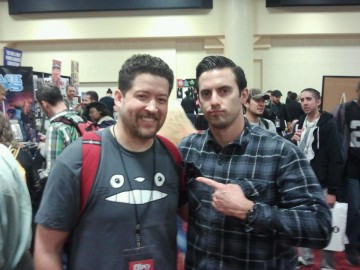 BAM! Just like that! He was that cool about it. We even got into a conversation about my phone (PLUG—it’s the Samsung Galaxy S Generation 1; it’s super sleek and has an excellent Android operating system). I got back in line after that and was just totally giddy for the rest of the time in line. And even after this, I still got to meet Todd McFarlane, again! This bad boy was $100 and totally worth it. I would’ve paid $200 and been extremely happy. 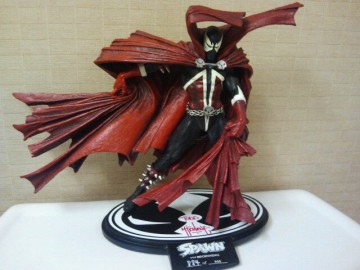 By this time, it was time to start heading home. But I still had one more thing to do. I had to find Robert Kirkman and get him to sign a book for my bro Eddy. So I made my way to the SkyBound table and he was just sitting there. I quickly took out the book and asked how his day was going. He said it was going alright and took my book to sign it. 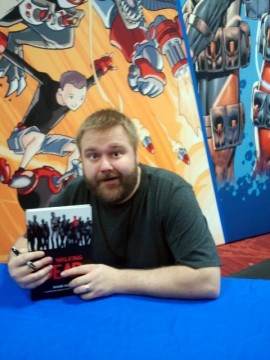 He then saw my ‘Haunt’ sketchbook. “Aww man. Did Ryan finish that piece? I saw it in his room and it was looking sweet.”. OMG. Robert Kirkman recognized my sketchbook! ARGHHHH!!! My head was exploding!!!! I explained how I was going to get it finished the next time I saw him and then I quickly said that this was the best convention EVER. As soon as I said that he kind of gave me a quick surprised look. THEN, he leaned over the table. He saw my kids. They were both holding the third printing of ‘Super Dinosaur’ number one. He asked how old they were, to which I answered him. He then pulled out two copies of the ‘Super Dinosaur’ trade and signed it. He got out of his chair and gave it to my kids. Come on. Do people do that? He could’ve done what I have seen people do a thousand times and kind of tease it to the kids for me to buy it. But he gave it to them, signed it and did it with such a cool attitude that I almost blew up with sheer excitement FOR my kids. I thanked him heavily, and have gone back and bought every issue since.

That was the last thing that happened before I left image Expo. I was so impressed by it all, I have dubbed it “THE BEST COMIC CONVENTION, EVER….PERIOD….SERIOUSLY”.