Image reasserts its place in the comics industry in the 2014 Image Expo. The Expo has come and gone and I’m trying to make sense of the flurry of news and press releases I received. Where the original Image Expo held a reunion of most of the Image founders, this year’s edition is a showcase of new directions with several notable comics creators.

What about those teasers that were sent before Thursday obviously hinting at Invincible? Jude Terror of the Outhousers pieced together the clues and stated that it’s for the 111th issue of Invincible. Indeed, Skybound revealed Invincible #111 hyped as “the only superhero comic you’ll ever need.”

Anyways, what other announcements came out of Image Expo? Lots. Image held a panel Thursday afternoon called “i is for Incognito: Special Session with Surprise Guests.” Eric Stephenson presided over Image’s touting of the newest announced comics featuring names you may have heard of. Comic Book Resources has the full report. Meanwhile, I give the top 5 (in no particular order) most interesting titles to come out of this year’s Expo:

“It’s a horror book that takes place in 1916. Jerry Bruckheimer is not rushing to make that movie,” says Snyder during the “Incognito” panel, ensuring attendees that Wytches isn’t some hasty effort made to push a Hollywood adaptation. Along with artist Jock, Snyder aims to craft the scariest stories he can think of.

Speaking with Comic Vine, Snyder says that Wytches is poised for a September release. Maybe by then, it’s enough time for him to juggle his duties at DC and Image. The full Comic Vine interview video is below:

Morrison and Burnham, once the dynamic duo of Batman Incorporated, teams up again to take a jumble of ideas, the protagonist is a genius detective-type engaged in a “weird stream-of-consciousness, Lovecraftian” story. This is done to, you guessed it, scare us to death.

“I don’t want the readers of a horror book to feel comfortable at all,” Morrison tells Brian Truitt of USA Today. Burnham promises very, very intense imagery. Truitt reports that:

Burnham teases that the visuals “will run the gamut from ‘quietly eerie’ all the way up through ‘cut out my brain so I don’t have to remember seeing this!’ “

I don’t know whether we’ll get good Grant Morrison (All-Star Superman, We3) or bad Grant Morrison (Happy), but I won’t be surprised if the resulting six-issue mini-series will be talked about amongst comics readers.

Airboy, that quaint relic of the Golden Age. Amazingly, I have memories having a few Eclipse-published Airboy comics. Robinson & Hinkle are spicing up the old stories by… telling stories about how they make Airboy comics. Yay?

Anyway, this meta may be a refreshing change of pace. I’ll also note that a vamp named Valkyrie seemed to be a popular character in the Airboy mythos. What part will she play in the new, “semi-autobiographical” Airboy comics? 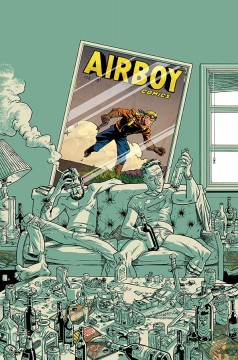 After Black Science, Remender offers a new sci-fi story based on a Tocchini sketch of an astronaut.

“Low explores what happens to groups of humans who are holding out hope for a solution when one is quite unlikely. It’s an examination of how quickly our ideals shift when we’re forced to make pragmatic choices for survival,” says Remender. In the real world, they would be poor people lying, cheating, and stealing just to keep a roof over their heads. No character details have been revealed beyond the few pages of artwork shown from Bleeding Cool.

The cover to Low suggests there’s hope with a large mecha-like machine standing next a little girl reaching for its “heart.” 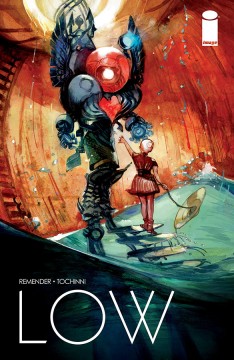 The Fade Out by Ed Brubaker & Sean Phillips

One of the first announcements for Image Expo 2014 is that Brubaker and Phillips signed a five-year deal giving them total creative control. They’re talented in crime and noir stuff, something that’s hard for me to get excited about. Regardless of my feelings, congrats to Brubaker and Phillips for getting a monumental deal.

The first new collaboration announced is The Fade Out, and it’s as noir as it gets:

It’s a brutal crime story set in late ’40s Hollywood, and all spinning around the mysterious death of an up-and-coming starlet.

The cover art depicts a bloody typewriter. Maybe the main point of view will come from a screenwriter instead of a gumshoe or cop? The choice of protagonist may or may not help The Fade Out stand out from other noir thrillers.