Finally, a new New 52 title I can look forward to reading. Tim Seeley, Tom King, Mikel Janin and others tell the tale of Dick Grayson’s next stage as a hero. Most of my comments are about the first few pages of the comic. I’m not a big fan of Dick Grayson and I’m not really into spy stuff, but Grayson is more interesting than Agents of S.H.I.E.L.D., a show I’m tried of already after one season. SPOILERS ahead.

The cover by Andrew Robinson shows secret agent Dick Grayson pointing a gun. THe artwork has been changed to give our star floppier front hair.

No, Dick Grayson isn’t trapped in a can of Tab cola. The pink and purple rings suggest that the comic has a heavy mod-era James Bond influence. Not guite so, but artist Mikel Janin gets opportunities to illustrate fancy maneuvers later.

The first story page is to the point showing Dick Grayson’s varied history. Though the Frank Miller-esque narration is almost giving me flashbacks to Miller at his worst (i.e. the past 15+ years). Thankfully, anything encroaching bad Miller ends at that page. Again, my level of Dick Grayson knowledge is casual. I understood 3/4 of the page: 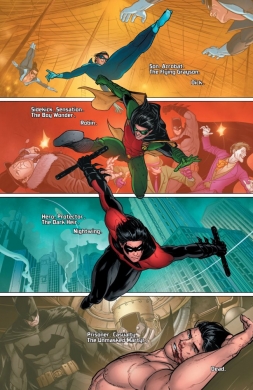 The last panel is a challenge. Grayson, like many other superheroes, experienced death. However, I skipped Forever Evil altogether so there’s nothing there to indicate that Lex Luthor deliberately stopped Dick’s heart to prevent a bomb that was attached to him from blowing up. Ah, the delicate balance between giving new readers context and not boring long-time aficionados.

Mikel Janin is probably relishing the challenge to liven up an espionage tale. The double-page spread following the introduction. In the present, Grayson is preparing to approach a moving train to begin his mission for Spyral. Here, Janin presents Grayson as acrobat-turned-spy which is made clear if eyes are moving top to bottom, left to right.

The bottom of the spread shows Grayson, disguised in a blond wig, ready for action. Through motion lines, eyes moving left-to-right will witness the impact of a gun boomeranging off a phone pole then smacking a bad guy’s head. Like me, you may have went straight to the gun-on-head panel instead of going with the flow.

The story continues with Grayson seeking out a big fellow who is no mere patsy, Grayson and Black Oak fighting it out, Grayson and Helena Bertinelli using mind control through Hypnos technology, and a dash of double agents and double-crosses. The issue concludes with the head of Spyral, the spiral-faced Mister Minos, overseeing his plan to expose our superheroes.

(I’m still wrapping my head around Dick’s trapeze act with his “target.” It’s an awesome act, but it’s unclear how they both land and not get seriously injured.)

The creative team ensures that this series is not a globetrotting vacation. Though I had to research more about Spyral and Bertinelli, the issue’s twists and turns make for a satisfactory piece of a bigger story affecting the DC Universe. Rating: GREAT out of 10.

Grayson #1 is plotted by Tim Seeley & Tom King, written by Seeley, drawn by Mikel Janin and colored by Jeromy Cox.