I hope you’re enjoying the new series of Doctor Who on BBC/BBC America/somewhere else. IDW is launching a new volume of Doctor Who comic stories. The Doctor, Amy, and Rory visit 1851 to meet some weird psychic lady. But first, let’s examine the various covers made to celebrate the occasion.

Along with the regular cover by Buckingham and colorist Charlie Kirchoff, there are two complementary cutout pages to make your very own TARDIS. I can imagine many kids VWORPing away! But no matching Dalek cutouts? Why read the story when you can study the wraparound cover? 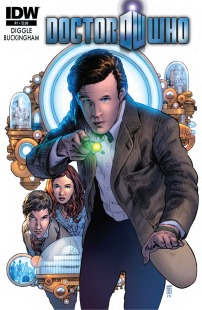 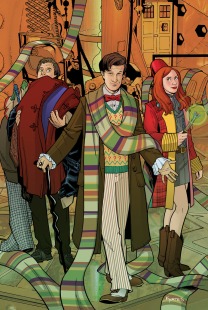 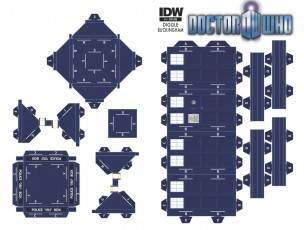 You may have seen this exquisite artwork by Kelly Yates. Wow, I’m impressed. What Whovian wouldn’t want to start a game find the other Doctor’s artifacts?

Who wouldn’t appreciate the craftsmanship? Also, there’s a nice detail with the TARDIS interior making a cool, orange backdrop. This cover should win many Whovian’s admiration. 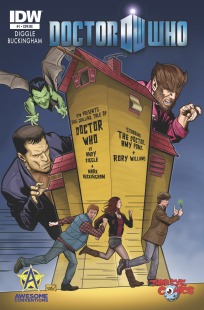 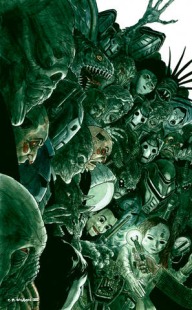 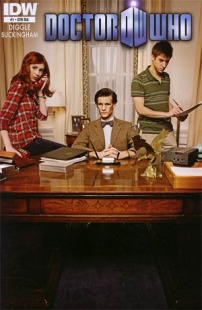 Here’s another awesome cover from Awesome Conventions and Third Eye Comics I call the “Movie Monster” cover. After seeing the TARDIS Three running away from the scary caricatures of Frankenstein’s monster, Dracula, and the Wolfman like they’re in the middle of a Scooby-Doo episode, I think I’ve landed in Heaven. Oooooh. Ahhhh. That’s a fine contribution from the Sharp Brothers.

Whoa, baby! Charles Paul Wilson III & Jason Strutz‘s Ultimate Comics Exclusive variant cover is DA PRIZZ, BABY! Many of the Doctor’s freakiest foes shaded in green. All of the horded mass can’t step forward; they’re being held by the glow of Sonic Screwdriver. I mean, the shade green is a sickening shade, at that!

This is up for sale from the Ultimate Comics website.

They even managed to get the actual cast to pose for the retail incentive cover. Cool! Cool! Cooooool! It’s as if they’re so EXCITED to be here! I’m assuming with the eagle statue and the red phone that the gang are in the White House Oval Room. That only means the BBC wants Dr. Who to take over America. Yipee!

Oh, there’s a story inside. Our heroes investigate a couple and their strange machine. The lady, Emily, acquired telepathy a year prior, and her husband is an inventor and does special effects for their seances. The couple went broke building the odd machine but sold it to the organizers of the Great Exhibition.

There isn’t much to see of the villain. No, really, it’s just a black, void-like body that freezes bodies. I did like how Andy captures the Doctor’s arrogance. That’s the smug Doctor we all know and love! Since this issue ends on a cliffhanger, it’s tough to evaluate.

Anyway, three hooves out of four. Those artists behind the variant covers did a wonderful job. I’m reminded of something a wise man said of the concept. The quote goes “they’re a classic example of the inverse ratio between the size of something-or-other and the size of the brain,” is it?