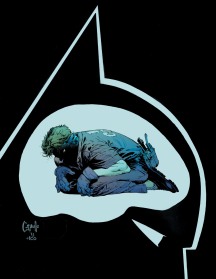 The Joker is a major opportunist. He has a contingency for everything, it seems. The demented one stays one step ahead of Batman. Even a good old haymaker may become poisonous to Batman’s health. Joker coats his face, or what’s left of it, with poison that is able to knock out Batman. Joker, probably seeing Bats as a “dance partner” of the Gotham Destruction Ball than a foe, doesn’t kill him. Batman eventually recovers, but not before an unsettling dream where Mistah J has usurped Alfred as the family butler.

It sure is nice of the Clown Prince of Crime to buddy up with the Riddler. Scott Snyder understands that Joker wants to spread the love:

[The Joker] wants to see Riddler be the scariest villain to Batman he can be, and in doing so, make Batman stronger.

Batman has the opportunity to make things right in Gotham, but I think his own mental issues aren’t helping him. Despite evidence to the contrary by Batgirl and Nightwing, Bats is convinced that the Joker is bluffing about the knowledge of the Bat-family’s true identities. Bats decides to crash through a resident’s window instead of using stealthier means. As the plot and profitability of DC demands, Batman continues to go alone. The cliffhanger of Batman #15 has Batman deciding on an unorthodox, for most superheroes, method of confronting the Joker. 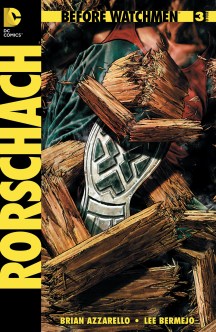 Rorschach has an opportunity to mend, but his priority is with the scum of New York, especially Meathead. On one hand, he seems level-headed enough to ask the waitress out. On the other hand, I think his expressions are out-of-character with what’s been established by Alan Moore (mommy prostitute issues, disdain for relationships).

Maybe Before Watchmen provides an “origin” for Rorschach’s misogyny. I hope not; I’d think antipathy would build up over years and years. BW: R #5 is a competently-made quick read, yet the main character’s a bit off-key. The covers, however, are very inventive in putting in Rorschach’s trademark look.

Read my previous commentaries of Before Watchmen.