Comixology is offering the first issue of Mad today for free, but this isn’t the Mad that zings pop culture from “the usual gang of idiots.” It’s the original Mad comic that took aim at then-popular genres like Westerns and Futuristic Sci-Fi.

I’m not sure how young audiences who are exposed to Mad via the Cartoon Network show are going to take in panels that are sometimes dense in text and genres that fascinated people in the 1950s. Mad #1 is still an awesome historical curiosity.

According to the Grand Comics Database, all stories, the comics and text pieces, are written by the one and only Harvey Kurtzman. Mad wasn’t content to exaggerate, Kurtzman’s ideas twists, turns, and surrealizes expected story beats. Who else tries to get comedy mileage out of the name Melvin? It’s no wonder that Alan Moore listed Kurtzman as a major influence.

Read the free preview of Mad’s very first story provided by Comixology, which will be discussed below.

The first story, “Hoohah,” features the art of Jack Davis with coloring by Marie Severin as a couple takes lodging in a haunted house. They meet Melvin the caretaker who insists that there are “no ghosts.” Two things: of Daphne and Galusha, guess who was the more assertive of the pair. The other: the final panel reveal what makes the haunted house haunted.

The next graphical story, “Blobs,” has two guys from the far, far future look into the history of humanity. Within the comical pages is a warning about humanity’s overreliance on technology. Art by Wally Wood: 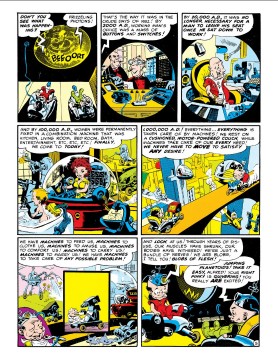 “Ganefs!” has Bumble and his boss attempt the perfect crime. Art by Bill Elder. There’s some absurdity along the way. Bumble’s plan seem so convoluted: 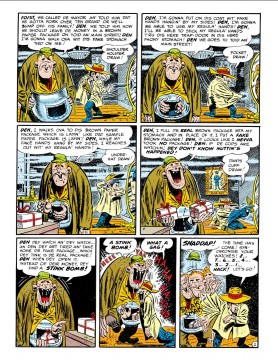 In the end, the Boss makes his way to the hideout, but the ending shows how Bumble, left behind at sea, fumbled: 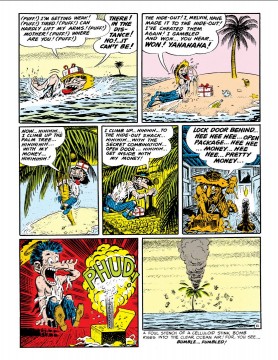 “Varmint!” is a Western parody with the bestest gun in the West, Textron Quickdraw, taking on chumps like Kickinmabelly Kelly: 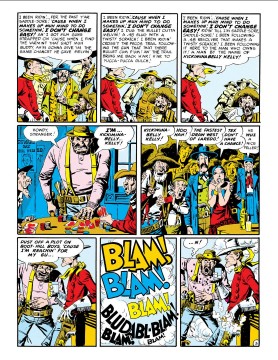 The story takes a strange turn when Tex kills the man who took out Melvin: himself. It’s not Tex who’s turning the tables, it’s Kurtzman playing around with Western tropes. Story illustrated by John Severin.