A review of “Born to Lose,” parts one, two, and three.

Action-packed comics have adopted many contemporary trends over the decades. Without past mythologies and pulp detective stories, Superman and Batman would be far different. Embracing beat-em-up video games is a recent trend. Scott Pilgrim may have busted the door open, but Burn the Orphanage: Born to Lose, created by Daniel Freedman and Sina Grace, promises to destroy the whole wall. 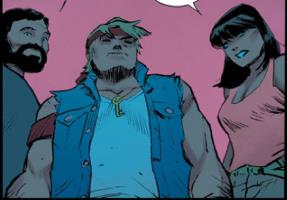 Part One of Born to Lose is more like a pilot episode than a prologue or first act. The plot, where Rock searches for the man who burned his orphanage, is detached from the next two issues. The street-tough Rock is joined by friends, burly Bear, and sultry Lex, as they duke it out with thugs and make their way to the boos character. There, Rock offs said boss with a decapitating flash kick. Oh, how glorious this is when you see the pages.

Part One goes beyond paying homage to virtual street brawling quests. With the black backgrounds, gritty streets, constant narrative captions, and overarching quest for vengeance, Part One is as much noir as it is brawler-inspired. One issue in and Burn the Orphanage is no gimmick.

The appeal of a video game is that the player is in control and gets to feel awesome. Character development goes as far as the goals the player-character reaches. In action games, especially, there’s little thought of consequences and how others are affected. Beat up bad guys, feel satisfied. Also, beat-em-ups and fighting games are the rooted in martial arts movies of yore. That leads to Part Two.

The Fight Rages On

Featuring a fighting tournament, Part Two homages Mortal Kombat and Street Fighter and flows like an action movie. There’s also a new villain in Elyse, a temptress and trickster who brings Rock to a mysterious island. Ultimately, Rock must fight Morgo, an alien beast fighting for save his people by gaining the water they need.

I do like how Morgo’s introduced: fighting against “Jax” in a dark cave. It’s contrasted with Rock duking it out on a rickety bridge. That said, Mortal Kombat II was the peak of MK, don’t let anyone tell you differently!

In this issue, Rock shows that he’s not just another meathead. No, I’m not referring to his inspired, but gruesome, counter to a spinning piledriver. Rock tries to convince his opponent there’s another way out. He doesn’t completely succeed, but I applaud Freedman and Grace for bringing up alternatives to pure mano a mano.

Some have seized upon discussing the bromance trope, but Rock and Bear don’t actually spend that much time together. Rock’s role is the hero who must right wrongs. Bear earns favor from the reader by, as Grace intended, being as good a fighter as his friends. One of Bear’s best moments is his rationale for people being irrational while in love.

Part Three has Rock transported to his opponent’s home planet and must deal with a bloated beast as punishment. Meanwhile, Lex and Bear have an interesting conversation about relationships, with Lex as the pessimist and Bear as the optimist. Their conversation isn’t a showstopper and both have their points.

While the chat’s interesting, the video game homages are an opportunity for readers to cheer, “Yay, old games!” They make sense within the plot, but it a feels a bit like the obligatory crowd-pleasing homage section. Rock versus monster is an enjoyable clash, but the final page of Born to Lose, featuring a major villain, is anticlimactic. I get the feeling that the creative team is rushing to an end so they can get to the next chapter, “Reign of Terror.”

Overall, I like that Born to Lose doesn’t stick to being about the thrill of the fight, but is willing to show the consequences. I’ve liked Grace’s work before as artist on Li’l Depressed Boy and as creator of Not My Bag, and I’ve haven’t been disappointed by a work of his yet. I’m looking forward to his and Freedman’s ongoing series and how the characters grow and what monsters will be fought. Maybe Rock, Bear, and Lex will become their own triumphant legends.

Burn the Orphanage: Born to Lose is published by Image Comics. Issues co-written by Daniel Freedman and Sina Grace and drawn by Grace.

Burn the Orphanage listing at ImageComics.com.