Let me start off by saying that Brass Sun is one of the most beautifully rendered books I have ever read. Both written and illustrated. The way the words bring these worlds to life and the way the art allows the reader to step into these worlds is nothing less than extraordinary. The planets that are brought to life in this book are so much fun to traverse and, even though we get a history of how they have all come to be, leave you wanting more in the wake of the protagonists departure.

While I have reviewed issues one and two separately before this review, I must say that the long wait to see this book compiled into a collection has been worth it. My need to see Wren and Conductor Seventeen complete there journey needs to be filled!

Mr. Ian Edginton and I.N.J. Culbard know how to get a reader fiending for there next fix. Obviously there imaginations know no bounds as the story they have brought to life, as far fetched as it may be initially, takes form in a beautiful re-imagining of the science-fiction genre. My bet is that this series will take home countless titles before it has concluded and will become character study material for college classes before too long. 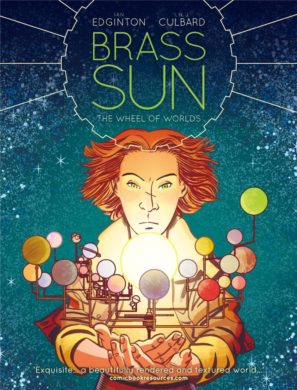 Which brings me to my first point of review: characters. Many a time I have felt like I get to know a character through a comic. Whether by reading the books, watching the movies or even brushing up on there history via the internet. Brass Sun is different in the fact that there is no history for me to look for. It’s a brand new story filled with brand new characters. Some of those characters are people. Some of them are planets. Regardless, they are all brand new and offer so much more than the reboots that are currently going on in comics.

There is only so much you can do to a character that has been around as long as Marvel and DC characters before realizing that a huge change must be made. This story takes place within a history of a universe but revolves around one person. This one person meets many other people on her journeys and eventually leads her further down the road of her journey. Already, I have become more engulfed in this story than most others I have read this year. And mainly, it’s because of the characters. They keep me coming back for more.

With every issue I was introduced to more and became more fascinated by the world in which Brass Sun takes place. The planet Hot Air was home to many a fascinating character. Characters like Ariel O’Conner, the Sweet Sisters, Chairman Hector Pei and Arthur….OH, ARTHUR! SO EXCITED to see where that is going! With a new antagonist unveiled, the story is getting better and better.

We also have the magnificent beasts and mechanical monsters, which are beyond comprehension but are saturated with creativity. From automatons to dreadnoughts, skysharks to jackanapes, and from Sabrefins to a Leviathan. These creatures were all found on two worlds! I can only imagine what Mr. Edginton and Culbard have in store for future stories.

Now, With that in mind, the appearance of the Blind Watchmaker was a DOOZY! Obviously, Mr. Edginton knows his stuff when it comes to binary, celestial bodies and the workings of cultural deities. The realization that the “God” that everyone worshiped on these worlds is nothing more than a clumsy child was very appealing to me. I really liked the idea of, lets face it, an alien coming to Earth and accidentally causing its destruction to then become humanities new God. And now that Wren knows the truth, it’s almost as if she has been able to accept the charge of her destiny moreso than when she was believing it was the work on an all-knowing Godly body. In my humblest opinion, I’d like to think that there was a little bit of a joke in that one ;)

All in all, I would have to say that this story is wound up very nicely and kept on getting better as I read through it. By the end of this book, I realized that there is a very long game being played here. It certainly worked for this first compilation. For even though I was introduced to many characters and stories, I was also left with questions.

Questions like, will Conductor Seventeen turn on Wren as he was ordered to by the Station Master even though he obviously has feelings for her? Will Ramkin become an even more involved character? What lies ahead for Hot World? Seeing how much of this story has already paid off by feeding my hunger for an original story, I am more than willing to to stay tuned to find out.