Once every few years a book pushes the boundaries of conventional comics. THIS is that book. The overall story and art surpass that of most mass produced comics nowadays. My experience while reading this issue can only be compared to that of watching a Hayao Miyazaki film. The characters are rich and the story is captivating. I cannot get over how amazing this book looks. 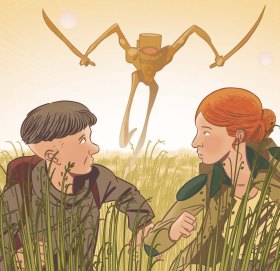 The character of Wren is developing in leaps and bounds and writer Ian Edginton has kept the reader abreast of all developments. Mr. Edginton really understands how to portray a strong female role in a mostly male dominated market. If I could, I would liken her to Katniss of the ‘Hunger Games” series. She starts off rough and gradually becomes the hero the book needs.

Along her transformation, you see that the people she interacts with are rapidly helping her to adapt in new situations that she can barely understand. Conductor Seventeen is playing a huge role in keeping her alive as well as keeping her on her toes. As it seems, he is helping he grow into the heroine she needs to be by helping her understand the world as it is, not as she has been told. And I only say this because at every single turn she is faced with either a new complication or twist in her adventures.

Seeing her journey through the art of I.N.J. Culbard has been so much fun! He actually GETS the characters. It’s rare to see a team like this in our day and age. Even though it’s no longer the 70’s and 80’s, where you had the likes of Perez and Wolfman or Miller and Janson that would be synonymous as a team, you can still get that this duo will achieve that type of status soon enough.

Another great thing about this book is how much this world differs to our universe. They believe a blind watchmaker created there universe and have an over-bearing amount of proof that that is the case. The ramifications of KNOWING that their version of the Almighty is real have proven to be their downfall.

I see the case being that since there really is no need for faith in this comic, as everything so far has been proven to be FACT thus far, that the church itself has no real basis to BE. Unlike the church of our world, where it is based entirely on faith, this world has been accustomed to a more violent way of life and showing that there will be no tolerance for the non-believers.

Now, what is making this one of those really fun books is that the differences don’t just stop with religion. Within these two issues we have been introduced to two planets, while vastly different, each supporting life! While the first world we are introduced to is based mainly on the church, the second world is built on a more aristocratic setting. The differences are astonishing and seem to represent different periods of time within our world’s history.

All in all, if you are looking for a great read, you need to pick this book up NOW.