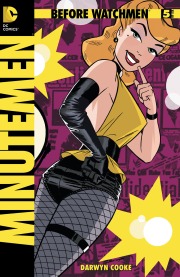 With all the focus on kids, I raise a question: who’s the moral center of Minutemen? Maybe some readers would consider Hollis Mason. However, Hollis has shown while he stands for law and order, his personality is more of a pragmatic follower. He may be affable enough, but he’s not exemplary. It’s probably better than seeing Dollar Bill get offed in the credits page.

In this issue, considers himself young Laurie Jupiter’s surrogate dad at Sally’s L.A. home. At poolside, Sally gives her disapproval of Hollis’ book. With topics like literal kidnapping in past issues and pedophilia in this issue. I don’t recall Hollis interacting with the Jupiters in the original Watchmen, so the Hollis-Laurie relationship feels a bit unearned.

The main plot involves preventing a nuclear meltdown in New York City. Suddenly, two new costumed heroes are introduced: a man and boy tandem with a pirate motif. Using the pirate motif is an inaccurate stab at one of the hallmarks of Watchmen history: comic books were populated by swashbucklers. An excerpt from their comic where the kid pirate ridss a motorbike is even shown.

Here, in the Minutemen’s twilight days, comes this duo who are compelled to have the remaining team, Nelson “Captain Metropolis” Gardner, Mothman, Hooded Justice, and Hollis “Nite Owl” Mason, join them. Since the thrust of the Minutemen story takes place in the 1940s, it shouldn’t be difficult to figure out the pirate pair’s raison d’etre.

It leads to another tragedy with a child. Hollis actions and reactions to the event may illustrate why he’s never to be a great crimefighter. The original Nite Owl may fight to save the day, but he isn’t a true leader. Perhaps that leads to a lack of respect from amongst his peers.

Anyway, Before Watchmen: Minutemen is an interesting read, but not totally fulfilling. The art has some of the greatest impact with excellent usage of the familiar 9-panel layout. As far as plotting, it’s as if Darwyn, constrained by the Watchmen story, had to place wistful What-Ifs without a concrete thesis.