Written and drawn by Darwyn Cooke. Colored by Phil Noto.

It’s been one calendar month since Minutemen #2, but it feels like it’s been much, much longer!

This issue opens at Hollis Mason’s garage sometime after the Minutemen. He’s threatened by a friend of Nelson “Captain Metropolis” Gardner for including revelations about Nelson in Hollis’ book. Hollis resolves to get his story out to the world anyway. 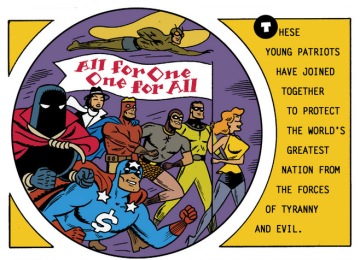 Flashback to the beginning of World War II, where the Minutemen are falling apart as their public standing is at it’s most heroic. Comedian’s incident with “Silk Spectre” Sally Jupiter has led him to be expelled, but before he’s out the door he brawls with Hooded Justice and warns the others not to cross him. Later while busting some Japanese men, Comedian is later recruited by a FBI agent.

Meanwhile, Dollar Bill puts on his usual show for the youngsters and the rest of the adoring public. With Mothman absent, Nite Owl performs the special guest appearance. After the show and inside a limo, Bill confides with Hollis over beers. Bill condemns Hooded Justice and Captain Metropolis as hell-bound sinners. Hollis tells him that what Bill just said is terrible and Bill relents from spoken comments about the couple but retains his enmity.

“With eyes that lost their lustre long ago, With visage fixed and stern as fate’s decree…”

From Silhouette by Emily Pauline Johnson

Silhouette, meanwhile, argues with Sally during a photo shoot. Silhouette leaves soon after; Sally tells Larry she wants Silhouette gone from the Minutemen. At a diner, Silhouette asks Hollis’ help that night. Hollis declines as he has police duty but gives her a phone box number to reach him during his beat.

Night falls and Silhouette makes her move busting the men watching a movie inside the warehouse-turned-gentlemen’s club. There, she rescues a pale-looking child. In their escape, however, a bullet goes through Silhouette and hits the little girl’s heart, killing her. Eventually, both Ursula and child are inside a church. Silhouette contacts Hollis.

The girl is laid to rest and Silhouette asks, “Why don’t you love us? Why don’t you love me?” The questions are originally asked to God/Jesus. “Us” could mean Ursula and either: the dead child, her lover, Gretchen, or maybe the Minutemen. Hollis takes Silhouette to Gretchen where her wounds will be tended. Minutemen #3 closes with the last two stanzas from “My Treasures,” by R.L. Stevenson, told by Gretchen who’s at Ursula’s side.

The church scene is important for two reasons. First, it firmly establishes Silhouette’s good-heartedness and godly reverence in contrast to Dollar Bill’s judgmentalism. Second, it illustrates how Hollis’ unrequited love for her has likely peaked.

How readers will like this issue of Minutemen will depend how they liked Silhouette. During the latter pages, Cooke’s dual narration devices of Hollis Mason’s square captions and Ursula & Gretchen’s bubbles are a nice touch and would be clumsy for an artist of lesser skills. If readers aren’t aware of Ursula Zandt as the naive, but well-meaning, champion of justice then I don’t know what I’d say to them.

I have reservations about Dollar Bill’s antipathy which is not unlike the real world religious right’s disdain for gay people. While it’s a given that Bill’s a corporate tool and thus not very affable, his dislike of Hooded Justice and Captain Metropolis has Bill veering towards a one-note caricature of little virtue. It isn’t unreasonable to believe that Bill and Ursula would have a public function together for a children’s benefit.

Cooke’s art still amazes. It captures the Golden Age look during the Minutemen’s darker times. The artwork, while never gimmicky, has some Modern Age touches keeping in line with the original Watchmen. Okay, the preceding statement has always been true in this series, but I was the most impressed of Cooke’s style in this issue. As for Cooke touching upon homosexual topics, I’m moved by Cooke’s effort to say something despite my decree of RHM not being a place for overt sociopolitical commentary.

These are difficult times for both sides to build a bridge of peaceful dialogue for each other. Unfortunately, those who supposedly need to read about Silhouette’s bittersweet heroism will likely never touch this series. It’s my hope that we retain our dignity and nobility and seek out love. We should overcome either our inner Bill Brady or our inner reverse-Bill Brady, depending on your view.

2 thoughts on “Before Watchmen: Minutemen #3 Review”