Written and drawn by Darwyn Cooke. 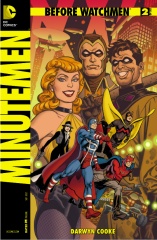 What to expect from a prequel: things that are expressed and implied in the original work are shown in more detail. Enjoyment of the second part of Cooke’s exploration of the superteam, the Minutemen, will depend of how the relevations of Watchmen piqued the reader.

Initially, we are taken forward to a 1962 conversation between Larry and Hollis Mason. A few pages later we get back to 1939 and the first adventures of the Minutemen. The flashback only reveals Hollis holding a deep regret. Cooke properly gives each member a distinct personality. Dollar Bill’s earnestness and Silhouette’s concern for children are new to the Watchmen universe.

One journey busting Italian smugglers doesn’t go smoothly. I appreciate how each part of the Watchmen can make a cohesive whole at the advent of World War II. Mothman has some action this issue. I get the impression that the other Minutemen feel that Mothman is really smart for creating the ability to soar. It’s a setup to his eventual and unfortunate fate.

Some of the Minutemen are progressing towards the characterizations established in Watchmen. Edward Blake, the Comedian, shows his prickly personality. We have several panels devoted to Hooded Justice and Captain Metropolis getting intimate. Their scenes are placed along Silhouette, Hooded Justice, and Mothman’s investigation of an abandoned building housing kidnapped children. Cooke’s panel placement is eerie and effective.

Also, this week’s installment of Curse of the Crimson Corsair supplements Minutemen. I stopped caring about Curse a few weeks ago, but you can see for yourself whether Curse is any good at DC Comics’ website.

Cooke, while delivering appealing art, does a fine job moving the plot along while being constrained by what Alan Moore and Dave Gibbons created in the original Watchmen series. Again, how you like Minutemen depends on how you liked the characters before BW. Revisiting this era may not make this part of BW great, but the adventure is fine as is.

I welcome your thoughts on this issue and Before Watchmen in general. Please use the comment box below to voice your opinion.

2 thoughts on “Before Watchmen: Minutemen #2 Review”