DISCLAIMER: May contain some spoilers and panels captured from a cell phone camera. 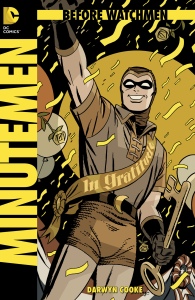 After reading this issue of Before Watchmen, I moved on from thinking of the franchise as Alan Moore’s baby. What I read did not completely meet the standard Moore and artist Dave Gibbons set, though. My main objection to Before Watchmen concept was that the story has been told well enough that prequels or sequels would not be necessary. On my way to get Creator-Owned Heroes #1, I also picked up the initial issue of the Before Watchmen maxi-series, which is about the 1940s superhero group the Minutemen.

DC made a good decision to have the Minutemen be the first subject to be featured on the shelves instead of Rorschach, which probably would’ve incited too much Nerd Rage in the comic shops. Minutemen #1 is an introduction to the Golden Age members and their reasons for fighting crime. Naturally, Nite Owl Hollis Mason provides the narration.

Darwyn Cooke is an inspired choice to illustrate Golden Age-esque heroics. The best parts of Minutemen #1 are the visuals. These include the initial compositions of circular figures representing life and the universe and the pacing of the action sequences. Color is dark and moody unless something significant appears such as Hooded Justice’s cape. The only vibrant scene is of the Silk Spectre’s staged foiling of a robbery. The panel layouts is approached similarly to Dave Gibbon’s layouts, especially when Mothman is introduced.

Sally, the first Silk Spectre, is gleefully confident in the public eye. Hollis Mason is the honorable daredevil of the night shift. These two characters Cooke did well.

However, the story left some of the Minutemen underdeveloped. Loading the issue with descriptions of the various heroes slows the overall plot. I don’t want Nelson Gardner, establishing the group as Captain Metropolis, to be a parallel to 1985 Adrian Veidt. Mason admits having feelings for Silhouette. This could set up an unwelcome unrequited-love subplot. The teenage Edward Blake, a.k.a. the Comedian, bullies a bartender after letting out his anger at everyone in a bar. No hints at hidden depths there. Dollar Bill’s appearance bashing crooks in a movie commercial for National Bank adds nothing to his character.

The backup story is The Curse of the Crimson Corsair, also available free from DC Comics. The two pages are just teasers for the next installment. Higgins’ art is a bit over-detailed and Wein’s writing tries to be creepy but isn’t compelling. 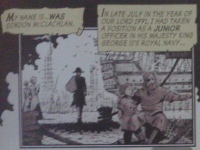 Visually, Minutemen #1 is a good start for the prequels. The plotting is shaky. Future issues should advance things further and deepen the World War II-era atmosphere. The following ish in Before Watchmen is about Laurie Juspeczyk, but I’d rather see how the Minutemen story unfolds.