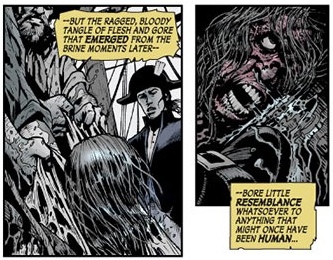 Here’s a quick background to “Curse.” Pirate comics are all the rage in the world of Watchmen and, I’m assuming, Before Watchmen. People have familiar, first-hand knowledge of the superhero. Pirate comics became an alternate form of popular entertainment.

In the original “Tales of the Black Freighter” story by Alan Moore and Dave Gibbons, a pirate takes a grueling journey to save people from the Black Freighter threat and to redeem himself. Some commentaries state that this is a parallel to Adrian “Ozymandias” Veidt’s path in the Watchmen series.

Tales is integrated within the main Watchmen story. In Before Watchmen: Minutemen #1 (I’m also assuming the other BW stories), Curse is a backup feature. For me, the current 4 pages of Curse plods along as published. This is likely because Curse is being spread around the stories of BW. This isn’t the best execution. I would’ve preferred those 2 pages I read in the back of Minutemen #1 to have more main story from Darwyn Cooke.

This is what I said about the first part of Curse:

The two pages are just teasers for the next installment. Higgins’ art is a bit over-detailed and Wein’s writing tries to be creepy but isn’t compelling.

After reading the next part, Higgins’ art features every wrinkle of the pirate’s skin and the oozy water of the first panel. Wein inches the plot forward by having the protagonist, McClachlan, risk his life to save the man being thrown overboard. McClachlan tries the roguish action of threatening the Captain, but McClachlan is about to be shot.

So far, what I’m reading isn’t a refined pirate story. While the story is bland, plotting may improve over the next few months. As published, this story is developing out of obligation to fill out some sort of Watchmen checklist. You can read Curse of the Crimson Corsair officially from DC Comics. Let me know what you think of it.