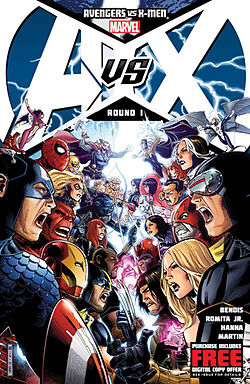 Right from the start, you can tell this isn’t gonna be your daddy’s Avenger’s versus X-Men. This promises to be one of the best “events” in recent years. It starts off, simply enough, with the re-emergence of the Phoenix Force. If you go back to Marvel’s Point One series, you would have seen the return of Nova (not Richard Rider). Now that AvX issue one has been released, we now know it was the Phoenix Force he was running from.

In the first issue, we get the politics. The government is being debriefed on the situation and you can tell tensions are high. If you’ve read the tie-ins as well, you can see how high the tensions have gotten.
Captain America has gotten so desperate that he has now gone to Wolverine, of all people, to get the low down on Cyclops and the Phoenix Force. He pretty much hit the nail on the money. He couldn’t have went to a better source. Wolverine let’s him know how it’s going to go down. In New Avengers, you have a more intimate story. With the recent threat of Norman Osborne, Luke Cage and Jessica Jones 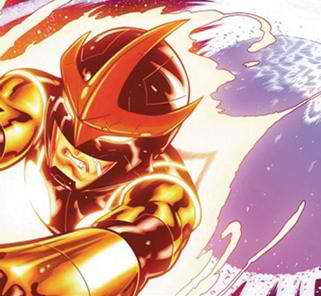 were on the outs. Luke makes a public (and embarrassing….but it’s love) plea for Jessica to come back.

The rest of the book shows that Luke is torn between being a superhero and a father. Jessica makes him choose and Cap puts the nail in the coffin when he says that everyone is needed, and Luke gives the baby a kiss goodbye. It’s actually one of the saddest moments I have seen in comic history and it is played down because of the event. Now we get back to the rest of AvX issue one and see that Cyclops (in one of the most shocking turn of events) throws the first punch!

The scenes that follow are extraordinary. Red Hulk gives the command and everyone jumps into the fray! It promises to be an awesome event and has definitely delivered already in the first issue. Plus, with every “event” issue, you get a free digital copy. You can’t beat that. Get to it people. Catch it from the beginning!

Watch a preview featuring some of the writers of the AvX event:
[tube]http://www.youtube.com/watch?v=r0fQN8eQ5_s[/tube]

One thought on “Avengers Vs. X-Men Issue One”