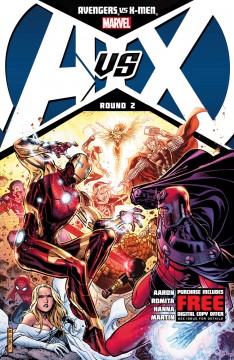 I am just LOVING this series! So far it has been a no-holds barred fight and it keeps getting better with all of the intimate stories being brought to light within this event. There are so many awesome things happening at once, it is hard to keep my excitement contained! From the very first page of this book, you are glued. No joke. By the third page, it’s time to change your pants. By the last page, it is time to take a nap because everyone knows how sleepy you can get after having such an adrenaline kick! John Romita Jr. was definitely the right guy for this book!

This book takes the fights you have wanted to see happen and gives them a purpose. You have the mutants believing people are trying to prevent them from ever “rising up”, and then you have the Avengers’ side which just wants to put the Phoenix Force in its place without anyone getting harmed. Too bad for them that Cyclops had to think with his heart instead of his mind. Because now EVERYONE is in a world of hurt and no one is going to be left unscathed! I don’t even think anyone will have enough energy to fight the Phoenix Force after this battle is through! 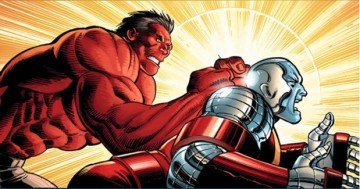 Let’s get into the fights! Collosal-naut (Collosus/Juggernaut) is pitted up against Red Hulk in a battle of brute strength! Luke Cage versus Namor in a battle to the depths (hehe)! Iron Man versus the master of magnetism, Magneto! Storm versus Black Panther!? I am personally looking forward to the winner of this round! Nothing says “EPIC BATTLE” like Super Wife/Queen against Super Husband/King! And how about the crazy Captain America and Cyclops battle!? OMG!

While some heroes should be crying “STOP!”, this book will leave everyone crying for more. I’m definitely coming back for Round 3 to see just how many concussions are being handed out. :)

Buy Avengers vs. X-Men #2 from Amazon