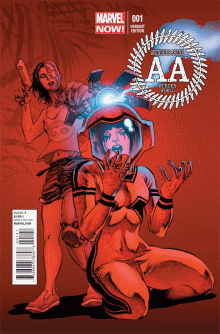 At my local comics shop, I saw the poster promoting the first issue. I told the owner that something critical about it. He rebuffed, however, that I’m judging something before reading it. While I did say that I didn’t like the idea, he did have a point. The point’s made clearer by finishing good two issues of this new young superhero series. Even your humble webmaster is fallible.

Writer Dennis Hopeless asserts that AA isn’t a “meat-grinder book where all of their characters die for shock value.” So far, I can trust him on this. Two deaths are in the books: the first because the relatively bland character self-sacrifices and the other is due to very poor situation assessment. The first issue is about the radioactive Hazmat, who wasn’t going to die because she’s intent on being chatty. The second issue, where AA isn’t thrown completely into despair, is about newcomer Deathlocket, daughter of Deathlok. 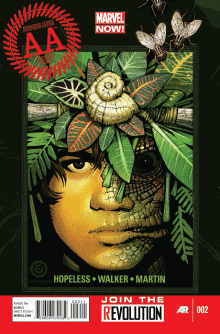 Without my conducting heavy research, most of the teens are fairly new to the Marvel-reading audience. Deathlocket is a half-cyborg trying to pick up the pieces in her life after her family’s bombed. “Pick up the pieces” may also be apropos to herself. She was so guided to be competitve that she didn’t gain a lot of humanity in her old civilian life. It’s too early for readers to get to know the combatants. It’s difficult for me to remember Arcade; AA doesn’t feel like “his” book at the moment. The all-out contest proper will start next issue.

One of the Marvel AR features features a (retired) pro wrestler dispensing advice to the teens. (I think?) It’s not quite CM Punk writing an intro for the Avengers vs. X-Men saga or Scott “Raven” Levy writing for a Spider-Man offshoot, but I like seeing DDP providing one more BANG for old time’s sake.