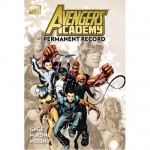 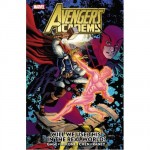 Avengers Academy is the one the most recent teenage super-teams. A group of six teens who were held under Norman Osborn now start the path to becoming the newest Avengers. On the other hand, some of them wonder whether they’ll tread another path either as villain, de-powered, or just staying alive. The theme of acting ethically is made evident in the instructors being flawed people. They are clearly not the first tier of Avengers emotionally: Hank Pym, who’s dealing with the loss of his wife Janet, Quicksilver, an ally at the moment, Speedball, trying to get over the infamous Stanford incident, and Tigra, a victim of a videotaped assault gone viral and whose child’s biological father was a Skrull carrying Hank Pym’s identity AND his DNA.

The dramatic and angsty scenes are balanced with not-so-brief fight scenes. I liked the teens: misty Veil, know-it-all Finesse, dino-changer Reptil, metal-skinned Mettle, toxic Hazmat, & show-off Striker. Writer Christos Gage gives each different attitudes and desires ensuring that the Academy’s first class won’t be BFFs too quickly but not always at each other’s throats. Gage smoothly gives newcomers to the current Marvel Universe quick details about the important events and character moments surrounding Academy. Gage also does an admirable job juggling the dialogue of snark-masters and cynics such as Quicksilver, Tigra with earnest do-gooder Dr. Pym. While many of the plots involve the teenagers acting irresponsibly, after reading both volumes I wanted the students and teachers to be better people. 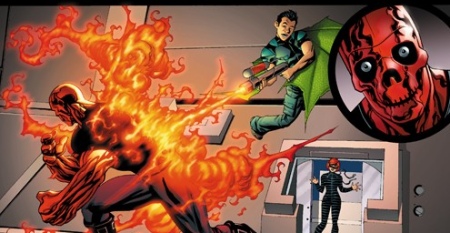 The artists, primarily Mike McKone, did a good job illustrating the emotions of the characters. Also, the fight scenes successfully move briskly. One highlight is the fight between super-savant Finesse and the worldly Taskmaster in issue #9 (Volume 2). That fight shows even those who feel they’re very powerful have their limits. Although I’m not a big fan of slicey triangular panels, the compositions contained within the either those panels  or the standard rectangular ones use the right amount of information needed.

There are two notable connections to the classic Avengers lineup: Steve Rogers (not using the name Captain America) is a surly guest instructor in issue #5 and Thor was the main Avenger fighting Korvac in issue #11. It also seems that Hall of Shame mega-villain Norman Osborn, the catalyst of the Avengers Academy story, is almost an afterthought in the later issues of Volume 2.

I recommend these first 13 issues making up volumes 1 & 2 for teens and up. It’s an fun mix of action and superhero drama. I look forward to reading the Fear Itself issues.