Written by Dan Slott. Pencils by Giuseppe Camuncoli with inks by Klaus Janson. 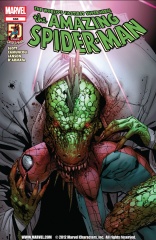 The review of “No Turning Back, Part 1: The Win Column” is done by a someone who rarely reads Spider-Man comics.

Yet another Spidey-Lizard battle in time for the Amazing Spider-Man movie. In this issue, Spidey is freed from gimmicks like encountering an island full of spider-powered folks or going into outer space. Amazing #688 showcases a conflict between Peter Parker and Curt Connors. Despite my cynical-sense tingling, this issue succeeded in getting me curious for #689.

Spidey has saved the day again from the events of “Ends of the Earth,” but the web-swinging bachelor gets in a pity party instead of partying with Mary Jane and friends. This tale switches from Peter’s latest angst to his fierce battle with the Lizard in a sewer. Spidey attempts to stick Dr. Morbius’ hypodermic harpoon into the reptilian Connors. The harpoon holds medicine containing Billy Connors’ DNA which will cure Curt.

Dan Slott plots a good story which balances the concerns of the principal characters. Spider-Man struggles with his life’s purpose, but he remains an action hero. An action hero whose emotions trump his science-trained rationalism. Curt Connors, as the Lizard, is slimy and highly confident in his strength. Morbius is the wild card. He’s a brilliant scientist but unwelcome at Horizon Labs. Initially he is working in the best interests of everyone, but the small hint of Amazing #689 at the end of the letters column shows that Morbius may have other intentions.

Camuncoli is a fine action scene composer. He brings energy and aggression to his panels. He and inker Janson gets the action and the drama moving at a quicker pace than I expected. 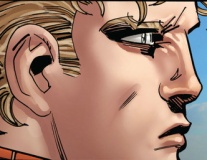 Minor flaw: one panel has Parker’s eye drawn with its iris well inside his eyeball. Also, Peter Parker’s light-colored hair and thick neck make him resemble a linebacker than a lean scientist hero. I’d rather have Parker look nerdy, but artists’ depiction of him didn’t ruin the ish for me.

Overall, this is a good issue of Spider-Man. For new readers, there are references to previous issues and encounters with other Marvel heroes. However, at the heart of the story there’s no need to look up guides or ask Spideyologists. Slott has the necessary stuff explained elegantly.