Exclusive paragraph for the spoiler-phobic: Prog 1824 has been hyped as a jumping on point. If readers are patient and willing to take in the various tones of the four strips then they’ll find a worthwhile experience. 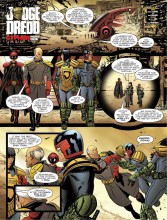 The lead strip, as always, is Judge Dredd. Last week, Hershey decides that Sov immigrants will be moved to Mega-City Two instead of being deported. However, Mega-City One may not get the food the Cits desperately need. Dredd & Hershey perform a little diplomacy, but don’t worry as politics is put aside by the second page.

Where the previous adventure, “Wolves,” felt more dramatic, “Cypher” goes for crowd-pleasing action involving Dredd versus a sniper. The Judges and their adversary, presented by Inaki Miranda’s pen, are less rugged contrasting with the crumbling landscape. With the help of Eva de la Cruz’s colours, these characters have a sleek appearance.

“Cypher,” written by Michael Carroll, is a high-impact way of starting this Prog.

“Dandrige: The Copper Conspiracy, Part One”

In contrast to Dredd dispensing justice, here’s the (re-)introduction to Dandridge. What do we have here? Readers won’t see much of Dandridge, the episode is filled with exposition about who he is and why he didn’t perform his mission, and his eight-foot manservant, Shelley provides the action.

Somehow, I enjoyed this because it can’t be taken too seriously. Dandridge is a fun-loving guy who wants life’s finer pleasures. Shelley has a brawl in an arcade and briefly shows a humane side. Alec Worley and Warren Pleece make something charming from what would be haphazard goofiness in lesser hands. 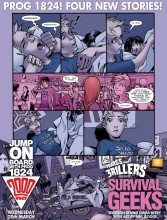 As the name implies, Tharg’s 3hrillers are 3-part stories that won’t wear out their welcome. This time, we have a woman named Sam. She’s digging some dude in a Star Wars T-shirt. The next night, she ain’t digging his cluttered mess of a nerd lair. As she leaves, she’s about to be upstaged by a peculiar posse.

The names of this group suggest who they are: Simon, the everyman who slept with Sam, Clive, the scientist, and Rufus, the stoner-slacker.

It’s the beginning of a strange trip…

…and Sam gets to be the damsel-in-distress. Will Rufus amaze us with slacker humour for this week and the following two weeks? I also take facetiously small offense with the snide remark against 1996 Doctor Who movie as it helped provide a guide of how not to further a major sci-fi franchise. 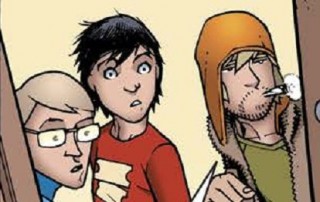 Anyway, there’s potential with “Survival Geeks” as the group is able to go on fun adventures through dimensions and time while making smart-aleck quips. I was amused. 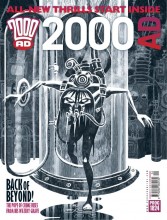 “Stickleback: Number of the Beast, Part One”

For new-reader-friendliness, Stickleback’s the trickiest strip of the bunch. It opens with a heist that isn’t connected with the get-together of Dr. Orlando Doyle and the revived Pope of Crime in the latter pages. The two main characters aren’t as well-known as Dredd or relatable as the Survival Geeks or the dandy Dandrige. The pace becomes leisurely when Dr. Doyle strolls along his lab.

D’Israeli illustrates a surreal alternate London. Some elements look like inverted monochrome oddities from the Negative Zone. The lab looks almost creaky. I imagine that every step Doyle takes, books or other valuables could fall over.

“Number of the Beast” so far has plenty of atmosphere, but I’m intrigued as to how the pieces will be put together.