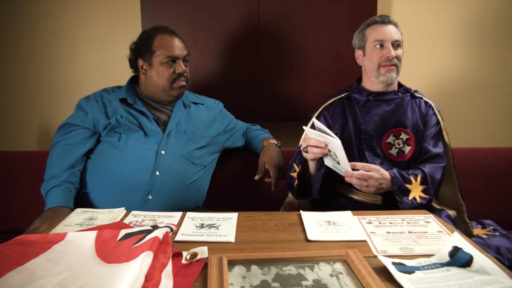 Unlike his profession as a musician, Daryl Davis’ methods of fighting racism isn’t always a crowd pleaser. Accidental Courtesy, the documentary featuring Davis, covers his befriending some Ku Klux Klan members and the impact of his actions. It’s a fascinating watch for how Davis thinks outside the volatile box of race relations.

As a younger (millennial) Black man, I have some mild ambivalence to Davis’ work. He has had success in turning some of his hood-and-robe-wearing friends away from the Ku Klux Klan and its sociopathic hate. For that, I am grateful that Davis illustrating face-to-face social interaction can make a difference. However, it’s a one-man movement about crossing the aisle meaning it’s slower kind of change, doesn’t end the Klan, and can send mixed signals. Some of the tensest moments of Accidental Courtesy is when Davis talks those who don’t approve of his methods, such as a representative of the Southern Poverty Law Center and a meeting with two younger Black protesters in Baltimore. Also, Courtesy throws in footage of Donald Trump in a seemingly last-minute attempt of relevance. Davis remains hopeful while living on the brink of the Trump presidency, but how Davis deals with the alt-right would require an update a few years down the line.

Accidental Courtesy is sometimes hard to watch, but I find Davis’ effort a net positive for improving race relations. It has shown me, someone who practically lives online, how we, in general, should value getting to know each other in the flesh. Americans should be exposed to more films showing the fight against racism in action.

From an advance screener copy provided by the filmmakers.

Middle school provided some of the worst moments of my childhood. Kids were reaching peak immaturity before high school came along when we all had to make important decisions about launching our adult lives. Cents, written and directed by Christopher Boone, captures the atmosphere where kids only think they have things figured out. While Cents is free of profanity and explicit stuff, there’s plenty of bad behavior.

Math whiz Sammy Baca (Julia Flores) concocts a major tweak to her school’s penny drive program. She convinces the students operating the drive to tell one other person a day to give a penny, that other person gets another to give a penny, and so on. Sam didn’t think up a pyramid scheme out of the goodness of her heart; her taking a cut of the proceeds beats selling gum on school grounds. Penny by penny, Sammy’s saves up for a brand new toy. Sammy’s intelligent, but only at the end of the movie she shows empathy, contrition, and even a bit of wisdom.

These girls aren’t criminal masterminds, so complications arise in executing the plan and egos are bruised. Because I had trouble keeping up with names, I made names for the other members of the group: ex-BFF, Mean Queen Selena Gomez lookalike, and MQSG’s lackey. The young ladies do fine portraying basic character types, but cartoonish MQSG acts as though she’s on The Suite Life of iCarly or whatever. END_OF_DOCUMENT_TOKEN_TO_BE_REPLACED

Drumline: A New Beat steps up on VH1 premiering 27 October. The Fox TV Studios-produced sequel swaps genders for the lead as Alexandra Shipp’s Dani Raymond enters the faltering Atlanta A & T Drumline program. However, Nick Cannon will make an appearance, hopefully in a more harmonious role than gossip fodder. END_OF_DOCUMENT_TOKEN_TO_BE_REPLACED

I am going to try and tackle this one from all sides. Mirage, Nickelodeon, IDW…you name it. If you are a fan of the Mirage Teenage Mutant Ninja Turtles (TMNT) you will walk out of the movie liking the teamwork and violence in it.

If you are a Nickelodeon comic fan, then you will like Michelangelo… that’s it. If you are an IDW fan, this is as close to perfect as you can ever hope to imagine. With that in mind, I will explain the reasons why I absolutely loved this movie. END_OF_DOCUMENT_TOKEN_TO_BE_REPLACED

Marvel’s Guardians of the Galaxy kept the positive momentum for its Cinematic Universe making over $160MM worldwide in its first weekend. My friend, Roshawn Rochester, thinks Guardians is the “movie of the summer.” Now there’s further reason to delight in Marvel’s spectacle: Bill Mantlo “thoroughly enjoyed” the movie according to his brother. END_OF_DOCUMENT_TOKEN_TO_BE_REPLACED

THE movie of the summer is out now and it is amazing! Even with all the fantastic jumps we’ve made in technology, this movie is teeming with the 80’s, and the amalgamation of old and new school is mind blowing. END_OF_DOCUMENT_TOKEN_TO_BE_REPLACED

The underground music scene in Washington D.C. forever altered the definition of punk, taking it from nihilism and pulling it towards something constructive. Within this unlikely town in 1979, generations, musical genres and powerful personalities created a volatile mix that has influenced music and culture around the world.

Punk the Capital, Straight from Washington D.C., directed and produced by veteran D.C. filmmakers James Schneider and Paul Bishow, captures the essence of D.C. punk from its source and steers shy of nostalgia, making this history relevant 35 years later. END_OF_DOCUMENT_TOKEN_TO_BE_REPLACED

This has been my favorite Transformers movie YET! I went in expecting the worst, after seeing the changes made to Grimlock, but walked out completely entertained. This new series builds on the first trilogy and does it in a way that you don’t have to watch all of the movies again. But if you watched Dark of the Moon again, it wouldn’t hurt.

Though series alums Shia LaBeouf, Josh Duhamel, Tyrese Gibson and the always funny John Turturro are not in this movie, that doesn’t mean the cast is any less exciting. END_OF_DOCUMENT_TOKEN_TO_BE_REPLACED

As syrupy sweet Ping Pong Summer is, there’s a lingering aftertaste after experiencing the nostalgia sugar rush. Maybe others will or have liked it as a novelty, but I’ve become jaded after seeing many teen movies and TV shows. This indie comedy-drama is writer/director Michael Tully a love letter to 1980s fun, but that’s all viewers get. END_OF_DOCUMENT_TOKEN_TO_BE_REPLACED