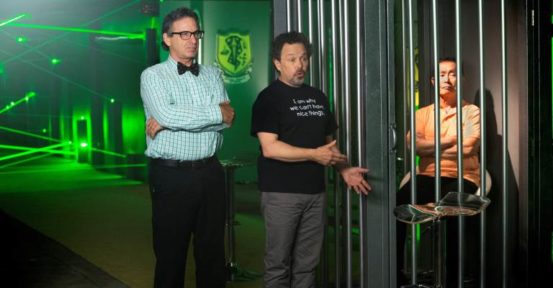 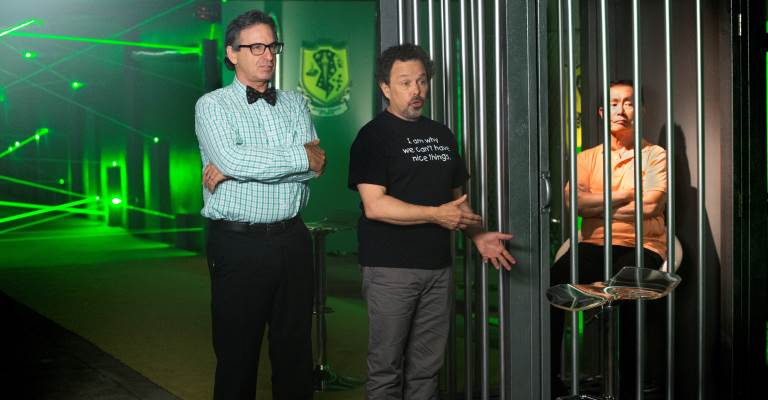 Last week, the Nerds debate Star Trek against Star Wars and Jack overcomes his ignorance of both. Also, he defeats Katie in a shocking spelling bee.

The gold team, Midas Touch Attack, are whittled down to two: Jack and Zack. And now, onto to review this episode entitled “Nerds to the Rescue.”

In the Aftermath of Katie Leaving Nerdvana

Xander sings a requiem for Katie. Zack is hopeful that he and Jack are the last two standing in Nerdvana. Chris is trying to intimidate Jack.

The next day in Nerdvana, Chris tries to cause discord between Jack and Zack. Zack and Chris argue and Zack then leaves. Brian compares Chris to a Sith Lord.

This week, Curtis is Ming the Merciless to Bobby’s Flash Gordon.

Curtis and Bobby give a overblown backstory to introduce that GEORGE TAKEI is part of the Nerd War! The Nerds must navigate through a laser maze and solve a complex equation to save Takei. Kayla has a moment where she shares with us that Janeway > all. As I’m not a Trek person, my favorite Star Trek leader is Scott Bakula. Hey, his work on Quantum Leap earns decades of goodwill from me.

I don’t know the accomplishments of Bakula’s captain, but Quantum Leap’s awesomeness will not be denied.

Jack and Zack are practicing with Zack giving directions to Jack moving through a string “lazers.”

More bickering with Chris and Zack. Jack (paraphrased): “This wouldn’t be tolerated in Asian cultures. If they did that, my mom would set them straight.” Oh snap!

Curtis gives the rules. Tripping a laser means a 1 minute time delay and player must freeze in place. Missed solution means 30 second time penalty. George lets out an “Oh, my!” and America smiles and laughs. Fun had by all.

Obviously, the remaining pair in Midas Touch Attack will take the challenge. Titans select Chris and Brian. He and Jack wear spectrum-blocking goggles.

Jack is through the maze first and both he and Zack read their math problem:

Through asexual reproduction, a single Tribble will produce a litter of 10 offspring every 12 hours. If you brought ONE Tribble aboard your starcraft, how many Tribbles would you have after 48 hours?

My (likely horribly wrong) guess before I saw the solution: 5561 Tribbles.

As Jack crunches the numbers without the aid of paper or calculator, Brian inches his way through the maze. On their second try, Jack figures out the 14,641 Tribbles. Brian never leaves the maze before MTA unlocks Takei. For those scoring at home:

Whew, I took me far too long to figure how to get to 14,641. I’ll leave it to the math scholars to figure how this relates to Fibonacci or triangle coefficients. Editing out Jack’s reasoning to the point of incoherence doesn’t help. I thought this was the “nerd” show. Anyway, MTA is jubilant and I need a break from the math.

Seeing Curtis & Bobby in Flash Gordon-related dress reminds me of a funner fight:

The Ack Attack is rewarded with a Legacy Effects tour that includes a Top Secret project. Xander, Chris, and Brian stage a fake newscast in their confessional.

Back in their dorms, Chris believes that MTA will vote Chris while Titans discuss the possibility of choosing Kayla and Chris. Later, Kayla talks with Xander into joining together to vote Brian. Meahwhile, Jack and Zack are split considering Chris and Brian. 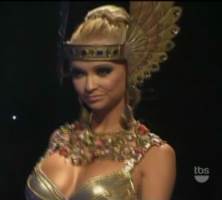 The Nerds are in a special room for the Nerd-Off. Correct trivia answers allow for the opportunity to shoot off 40 rounds to a model armada. Whoever has the most points after six rounds wins. Assistant Mindy is in some sort of sci-fi golden goddess outfit this week.

Next week, teams dissolve as the Nerds race in glow-in-the-dark go-karts.